Thank you to Jane Riddell for inviting me to My Writing Process blog tour. Jane took part in the tour on 16 December and her answers can be found on:  http://wwwbloggercom-janelilly.blogspot.co.uk/
My Writing Process
What am I working on?
I always have several projects on the go which could explain why I have not (yet) got past 37,000 words on anything; that was the length of my first People’s Friend serial The Family at Farrshore. I am currently writing another serial for them and have just submitted the second instalment for comment. I have several magazine stories at various stages of completion, a romantic novella almost finished, and about 20,000 words of what will be a full-length novel if I live long enough. Plus, from various writing classes, workshops and other prompts I have dozens of ideas – stories-in-waiting.
How does my work differ from others of its genre?
I don’t know if anyone reading my work blind (as it were) would know straight away that it was mine; that’s not for me to say. But I write in different genres and styles. If I’m writing a story that I plan to submit to Woman’s Weekly I would write it slightly differently from a People’s Friend story. A story aimed at New Writing Scotland or a national competition would be very different from both of those.
It’s odd what your sub-conscious throws up. A writing friend, who reads some of my work-in-progress, asked me the other week why twins figure frequently, and even a set of triplets. I have no idea! I do recognise, though, that some of my preoccupations appeared in my first PF serial so I’ve made a list of what not to include in the second one: archaeology, dogs, kittens, red-heads, Canadians, ceilidhs, kilts; and I will cut down on mentions of home-baking. As for multiple births … well, who knows?  What my characters get up to when I’m not looking is their business.
Why do I write what I do?
I mostly write women’s magazine short stories because I’ve been fortunate enough to have had around thirty published and hope to have more. I like the discipline of a word count because it focuses your mind on what is important in the story. I like knowing who my audience is before I start.
But I also like writing into the wind and going where it takes me; writing slightly obliquely – leaving gaps for readers to fill; writing poetically. I also love writing descriptions of scenery and there’s not much place for that when you’ve got a word limit.
How does your writing process work?
I wish I could but I don’t think I’ve ever started with a character in mind; it’s either a situation or a setting that I then have to put people in and get to know them. I’m usually a good way in before I realise what the story is about and who is important in it. So it can be a slow process.
I’m not a plotter; that’s why, I think, I work on more than one thing at a time. A solution for one plot development can occur to me when I’m thinking about another.
I start writing on the computer; if I get stuck I work on something else, as I’ve said, or else I write in longhand for a while, in pencil on unlined paper. That frees me up to proceed without the inner editor interfering and I think it allows the brain to make connections it wouldn’t otherwise. I would never send off a submission without first printing it out, reading it aloud and editing on paper.

Anne is a writer and teacher and grandma. She lives in the Hebrides. She can be a subversive old bat but maintains a kind heart. She likes gardening, hiking and riding pillion on her husband’s motor-bike.
She believes – indeed she knows – that there is life after forty, and she writes thoughtful, grown-up, romantic fiction where the main characters are older but no wiser. She has published one novel Change of Life as an indie author and her second book Displacement will be out early in 2014. She blogs at http://annestormont.wordpress.com/ – where you can find out lots more about her.

I’m a writer of many parts – I write travel as well as fiction – and even within the fictional world I’m always experimenting, trying my hand at a whole range of genres. Based in the beautiful city of Edinburgh, I find it impossible not to be influenced by the places I visit and the people I see around me.

To date my published work consists of short stories in The People’s Friend, Woman’s Weekly and The Lady. My first full-length novel, Thank You For The Music will be published as an ebook in February 2014 by Tirgearr Publishing http://tirgearrpublishing.com/authors/Young_Jennifer/index.htm

JENNY HARPER
I was born in Calcutta – hence my fascination with this buzzing city – but I now live in Edinburgh, Scotland. I’ve seen all sides of the publishing business, as a commissioning editor, journalist and novelist. My published books include a children’s novel and a romantic novel, as well as a number of books on Scotland and Scottish themes. My history of childbirth, With Child, Birth Through the Ages ­(written as Jenny Carter), is used as a reference by many historical novelists. It’s still available on Amazon!

A Friend of the family

It’s funny peculiar what memories can be cast up by a smell. I don’t often get a whiff of paraffin these days but when I do I’m straight back to my great-aunt’s house and the little paraffin heaters she liked to have all over the house and which the family was convinced would one day set the place on fire. Thankfully that didn’t happen.

Does anyone use smelling salts now? Great-Aunt had a bottle lying around which I, aged about eight, made the mistake of putting very close to my nose. Ouch. It wasn’t a mistake I made again.

The old house was damp, now a rare occurrence in the days of central heating and damp courses, but that unmistakable musty smell again evokes our visits.

There were good smells too – Scotch broth on the cooker, scones in the oven. Sweeties: a bag of peppermints, ‘bachelors’ buttons’ she called them, and packets of butterscotch for us children. In the once-beautiful garden, overgrown since Great-Uncle died, fragrant roses, peppery lupins and honeysuckle intertwined, and there was a catnip plant by the front door. 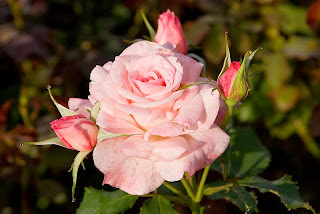 We didn’t live nearby but visited every three months or so. So there were always at least twelve copies of The People’s Friend for me to catch up on, which I did crouched over a pile of them on the sitting-room floor. I didn’t read the grown-up stories though, just the children’s pages with The Adventures of Will and Wag (time has not moved on for them – the lads are still having fun) and competitions – once I won a manicure set for being able to name seven different kinds of dog.

Great-Aunt had been a reader of The PF for many years. As a girl herself my mother had spent a lot of time with her aunt and joined her in avidly following the serials. Once, when an afternoon tea-party was in progress, the company including the minister’s wife, Great-Aunt was apparently mortified when Mum, who’d taken delivery of the magazine from the paper boy, burst in to announce a dramatic plot development.

I so wish that both of them could have known that I had a serial in The PF and am writing another; that this week I am delighted to have an article in the 7500th issue (about a visit to Orchard House in Massachusetts where Louisa M Alcott wrote Little Women); and that the week after next my twelfth story for the magazine will be published, a Christmas tale set in the 1960s called A Little Give and Take.

Perhaps, in the great scented garden in the sky, my mother and great-aunt will read it. Whether they will think it worth interrupting a tea-party over is another matter.