In which I acquire xx books

Purchases, in no particular order:

The Trouble with Goats and Sheep by Joanna Cannon (published 2016).
Set during the UK drought of 1976. Lovely hardback edition.

Year of the Tiger by Lisa Brackman (2010)
Thriller, set in modern-day China.

The Art of Baking Blind by Sarah Vaughan (2014)
‘Whoever you are, why ever you bake, this story’s for you’.

A Bit of Earth by Rebecca Smith (2006)
Author is ‘the perfect English miniaturist’ says Barbara Trapido no less.

Can’t Wait to Get to Heaven by Fannie Flagg (2007)
More small-town America, this time by author of Fried Green Tomatoes

Pictures of Perfection by Reginald Hill (1994)
A Dalziel & Pascoe novel. May have read before.

Beautiful Ruins by Jess Walter (2012)
Italy, Hollywood, and ‘the shabby revelry of the Edinburgh Fringe Festival’ …

Half Broke Horses by Jeannette Walls (2009)
With a ‘sassy, straight-talking heroine’ born in Texas, 1901.

Their Eyes Were Watching God by Zora Neale Hurston (first pub. 1937)
Virago edition 1986. Author has been recommended by several friends.

The Virago Book of Food: The Joy of Eating edited by Jill Foulston (2006)
Foodie extracts from books. Yum.

The Best of Girl

These last two to add to girls’ annuals collection.

I read/finished seven books in April. 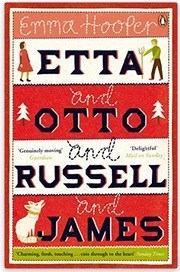 Etta and Otto and Russell and James by Emma Hooper
Read for book group (my choice). I hadn’t read this before I suggested it for the group – but I’d read about it and chose it because I like books set in the Depression (see Nine in November) and books set in Canada so this ticked boxes. It wasn’t the straightforward narrative I’d been expecting but nevertheless evoked the time and place through a handful of unforgettable characters both human and (sort of) canine. As in Elizabeth is Missing this book has a young author who seems to have got inside the head of her very elderly protagonists.

Austerity Britain 1945-1951 (Tales of a New Jerusalem) by David Kynaston
I finished this book in April, can’t remember when I started it, probably a couple of years ago. It's 692 pages, including the index. I have the next two volumes but haven’t yet embarked on them. Believe it or not I found it rather soothing if/when I was worrying about something last thing at night (I’m a worrier) to dip in and read about post-war industrial relations and statistics on the coal industry. Plus, as well as quoting from eyewitness accounts and newspaper reports the book has extracts from both published and unpublished diaries including Mass Observation diaries which I love – see this post here. 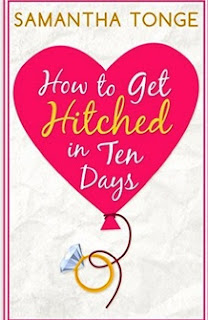 How to get hitched in ten days by Samantha Tonge
Novella, read on Kindle. Mikey is ‘every girl’s best friend – he bakes the creamiest cheesecake, loves movie nights and is a great dance partner.’ He shares a flat (and sometimes a platonic bed) with Jasmine, who is having second thoughts about her commitment to her boyfriend Dave after he bungles a proposal. When Jasmine gets offered a job transfer to New York Mikey comes up with a plan to get Dave to pop the question more romantically. Love the sound of Mikey’s diner – mine’s a chocolate milkshake please. 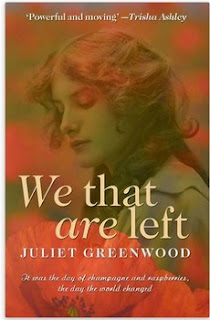 We that are left by Juliet Greenwood
Read on Kindle. 'Elin lives a luxurious but lonely life at Hiram Hall. Her husband Hugo loves her but never recovered from the Boer War. Now another war threatens to destroy everything she knows. With Hugo at the front, and her cousin Alice and friend Mouse working for the war effort, Elin has to learn to run the estate in Cornwall, making new friends – and enemies.'  Liked this a lot, for its characters and for the vivid descriptions of Cornwall, Wales and the battlefields of France.

Caught up with some recent best-sellers this month: 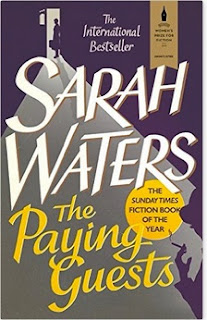 The Paying Guests by Sarah Waters
I’m a fan of Sarah Waters and I enjoyed this –not quite as much as The Night Watch which I loved especially for its structure; and it doesn’t have, as Fingersmith does, a terrific twist. But she is hard to beat for conjuring up an atmosphere and here it’s 1922 ‘and London is tense. Ex-servicemen are disillusioned, the out-of-work and the hungry are demanding change. And in South London, in a genteel Camberwell villa, a large silent house now bereft of brothers, husband and even servants, life is about to be transformed, as impoverished widow Mrs Wray and her spinster daughter, Frances, are obliged to take in lodgers.’

It’s a long book (570 in my hardback copy) and I see that some Amazon reviewers thought it slow but I thought all the detail was necessary to whisk the reader to a different but completely believable time and place and situation – which they would be glad to leave but would think about for a long time afterwards. 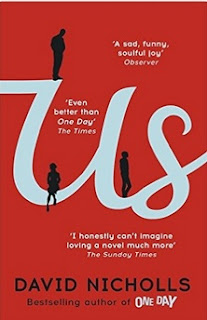 Us by David Nicholls
Terrific. Douglas’s wife of almost twenty-five years, Connie, has told him she wants to leave but she agrees to go ahead with their planned and paid-for holiday visiting European art galleries in the company of their moody teenager Albie. Douglas is a scientist, a research chemist. A certain person in my family is not a scientist yet the similarities between him and Douglas were remarkable – I suspect David Nicholls of hiding in my hall cupboard. It’s funny, it’s sad, it’s – well, if you haven’t read it yet do find out for yourself. 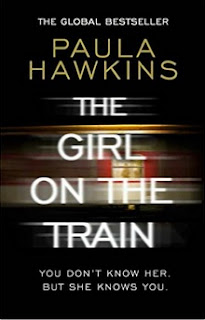 The Girl on the Train by Paula Hawkins
An unreliable narrator is always interesting – and tricky to write I expect.
10, 418 reviews on Amazon at the time of writing this (5983 5* and 471 1* with the rest in between). Is that a record? I thought it lived up to the hype – certainly kept me turning the pages. It will be interesting to see how they do the film as so much of what happens/doesn’t happen is the narrator’s head.
Posted by Kate Blackadder at 00:37 2 comments: