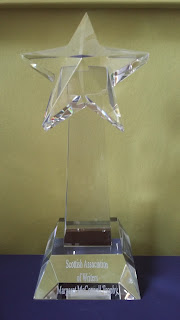 The Scottish Association of Writers’ annual conference was held last weekend in the lovely Westerwood Hotel in (not-so-) sunny Cumbernauld, two days of camaraderie, competition adjudications, workshops, readings, after-dinner speaker Helen Lederer, a quiz, a talent show with some fabulous singing, and eating and drinking twice as much as usual …

I was delighted to win the Woman’s Short Story Competition and to be the first recipient of the lovely trophy above. 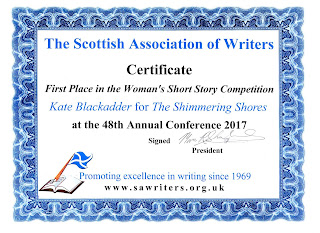 I couldn’t enter any competitions last year as I was adjudicating this one.

This year it was judged by Kirstin Zhang who has won several major short story competitions including one run by Harpers Bazaar magazine which resulted in twelve literary agents vying to sign her up – so it was an honour and a thrill to have my story picked out by her.

As you don’t always know what an adjudicator is looking for in the Woman’s Short Story Comp I’d hedged my bets by putting in two entries, one a more traditional magaziney love story. But The Shimmering Shores is set in the early 1970s and its protagonist, Joy, has an unhappy home life from which she escapes every Saturday by taking the bus to North Berwick and ‘the shimmering shores’ of the Firth of Forth. It’s actually a story I’m thinking of expanding into a novel and, when I told her that, Kirstin said she’d thought that there was more to be said about Joy. Watch this space …

And I came third in the General Article Competition, judged by Gill Hoffs. 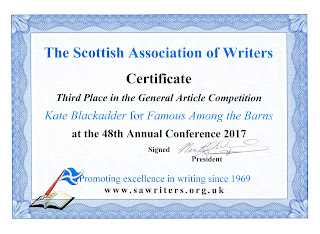 I don’t usually enter this competition (I prefer to make things up) but I’d written a piece of memoir after we had a workshop led by Bashabi Fraser at Edinburgh Writers’ Club so I thought I’d put it in.

Anyone who belongs to a writers’ club in Scotland which is affliliated to the Scottish Association of Writers is automatically a member of the Association and can attend the conference. I have been in Edinburgh Writers’ Club now for around twelve years and I love it. Thirteen members attended the SAW conference this year and won fourteen competition places, including four first prizes – a great way to celebrate the Club’s 70th birthday.
Posted by Kate Blackadder at 04:41 11 comments: