Magazine short story writers got a shock this week when it was announced that the fiction editorial staff of Woman’s Weekly was being reduced from three to one and that only their regular writers could submit to them i.e. they are closing their doors to new writers until further notice.

I’m very happy of course that I am one of those ‘regular writers’ (it was a nail-biting time before I got the email confirming that I was – there are many writers a lot more prolific so I wasn’t complacent.) I wasn’t on the list when the same thing happened at Take a Break and My Weekly so those doors are closed to me. But it is sad that this is the trend – when money needs to be saved in magazine publishing it always seems to be fiction that suffers. 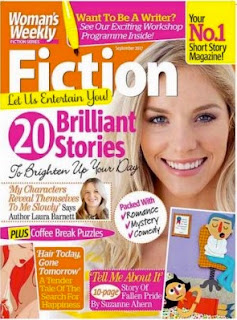 I do hope that this is not the thin end of the wedge at WW – that they continue to publish their twelve Fiction Specials as well as the weekly issue which has two stories and a serial.

Thankfully The People’s Friend – the world’s oldest women’s magazine (founded 148 years ago and long may it continue) –still has its ‘open door’ policy of welcoming new writers and giving feedback on submissions. Once you’ve had a story accepted you are assigned an editor who will work with you. If a story is rejected they will give the reason (and, yes, ‘regular contributors’ get rejections too) or they might suggest changes, work with you to improve the story. And however many stories you’ve had published it’s always a huge thrill to get an acceptance pinging through the ether! 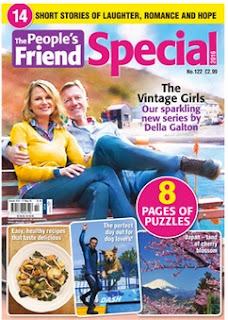 Between the weekly magazine, all the Specials and the annual they buy 600 stories a year ...

I am delighted to be the guest author again at their story-writing workshops, hosted by Fiction Editor Shirley Blair – in Dundee on 21 September and York on 28 September. I’ll be talking about getting ideas and developing them, with examples from my own work, and about story structure.

If that appeals to you but you’ve never read the magazine or haven’t read it for a while, I suggest you read a few current issues to see the kind of stories they are looking for –feel-good, as they have always been, and now with twenty-first-century situations and relationships.

There’s a booking coupon inside the current issue, dated 19 August, and in the next issue 26 August, and online https://www.thepeoplesfriend.co.uk/2017/08/21/story-writing-workshops-autumn-2017/.

Maybe I’ll see you there?
Posted by Kate Blackadder at 01:13 No comments:

I read seven books in July, one I wish I hadn’t. 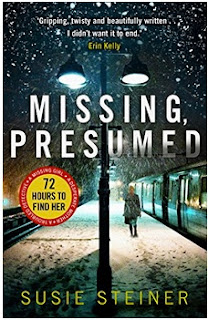 Missing, Presumed by Susie Steiner
Christian Aid sale purchase. Loved this police procedural. The main character, Manon Bradshaw, is a detective sergeant and what she has to deal with is this – ‘Edith Hind is gone, leaving just her coat, a smear of blood and a half-open door’. How could you not want to find out what happened next? The New York Times, no less, called it: ‘Smart and stylish. Manon is portrayed with an irresistible blend of sympathy and snark.’ 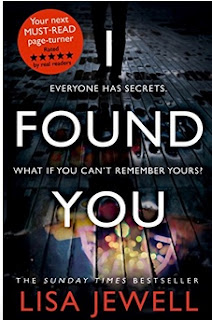 I Found You by Lisa Jewell
Read on Kindle. Lily has only been married for three weeks. When her new husband fails to come home from work one night, she is left stranded in a new country where she knows no one.
Alice finds a man on the beach outside her house. He has no name, no jacket, no idea what he is doing there. Against her better judgement, she invites him into her home.

I stayed up very late to finish this. My goodness, it has some extremely dark and harrowing moments. You have been warned. 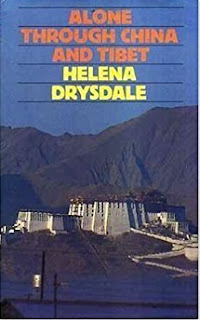 Alone Through China and Tibet by Helena Drysdale
Christian Aid sale purchase. I am rather obsessed by China (see why here) and wish that, like Helena Drysdale, I saw it before its modernisation began.

She went in 1985 and I travelled vicariously with her. I would not have the courage to do what she did – or the temperament. I like knowing where I'm going to sleep, and even the thought of arriving other than ridiculously early at a station or airport gives me the screaming heebie jeebies.

But I like to think that in some respects that I am more prepared for a journey than Ms Drysdale. I wouldn’t take the hour-and-a-half bus trip to Glasgow without an emergency granola bar. She got on a bus to go through Tibet, a journey of several days in one of the most unpopulated parts of the planet, and she did not take a single thing to eat with her, nor any water. Her fellow travellers were laden with snacks, including tins of mandarin oranges – they fished the segments out with chopsticks. She does not say whether they offered to share with her but after a day or two someone by the roadside ‘made us omelettes’. I’d have eaten my own hand by that stage. 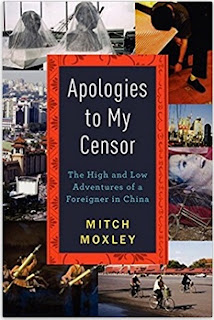 Apologies to my Censor: The Highs and Lows of a Foreigner in China by Mitch Moxley
Christian Aid book sale purchase. Another sojourn in China, this one a mere twenty-two years later but in a very changed country. Canadian Mitch Moxley finds himself in Beijing in 2007 as a correspondent for China Daily. He wants to be a journalist, or so he says … he doesn’t actually seem very keen on writing, or working come to that, but he gets up to various shenanigans as twenty-something men are wont to do … But hey, he’s in China so I’m willing to follow him. 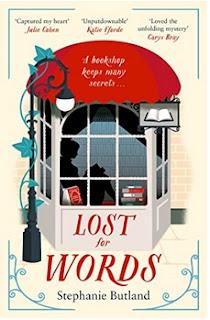 Lost for Words by Stephanie Butland
Read on Kindle. I heard about this on the Portobello Book Blog (read Joanne Baird’s review here).

I loved it. Loveday works in a second-hand bookshop in York for the wonderful, mysterious Archie. She lives on her own and doesn’t seem to have any friends or family – her story is slowly revealed. When she picks up a book on the street Nathan enters her life.

I never intend to get a tattoo but after reading this I’m pondering which first line of a book would I choose if I did. Perhaps it would be the beginning of Lost for Words: A book is a match in the smoking second between strike and flame. Isn't that lovely?

*****
I’m not going to say what the sixth (e-)book was. If I’d read the first page on Amazon I’d never have bought it – won’t make that mistake again. I kept going thinking surely it will get better but it never did. Banal writing, badly edited (not self-published, shame on the publisher). A young couple’s marriage is in crisis but as we never see them in the good times so what? I could tell you what happened to them but I couldn’t tell you anything about them, they were so one-dimensional. Two hours of my life I’ll never get back.
***** 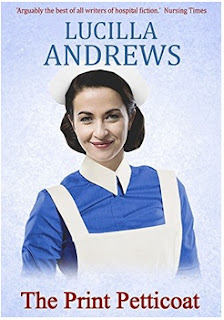 The Print Petticoat by Lucilla Andrews
Lucilla Andrews was the doyenne of hospital romance and some of her titles have just been brought out as e-books. This one is set a few years after the Second World War in a maternity unit that was evacuated from London and has not yet gone back. Joanna has several men who are very keen on her and it takes a serious and unexpected event to show which is the right one for her.

The 'print petticoat' by the way is a reference to the full-skirted uniform worn by nurses at St Gregory's Hospital.
Lucilla Andrews’ wartime memoir No Time for Romance (highly recommended) became part of a controversy involving Ian McEwan and his novel Atonement.

I was honoured to be asked to contribute an article for the publisher’s website and I chose to write on my favourite books about nurses (fiction and fact), see ‘Florence, Cherry, Lucilla and Me’ here.
Posted by Kate Blackadder at 12:40 No comments: