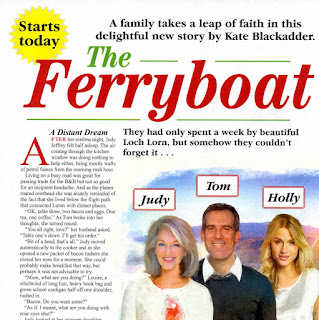 My People's Friend serial The Ferryboat, which was published last year, can now be read on the PF website.

Posted by Kate Blackadder at 01:58 No comments:

Email ThisBlogThis!Share to TwitterShare to FacebookShare to Pinterest
Labels: Kate Blackadder, The Ferryboat, The People's Friend

How many kilometres to Babylon?

How many kilometres to Babylon? 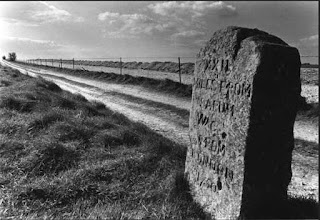 I have no idea but I do know that the imperial-measurement journey sounds a whole lot more exciting.

Do you know of any titles/poems/songs/sayings involving metric measurements? If not, can I challenge you to write one?

Imagine Robert Frost, on a snowy evening, having kilometres to go before he slept; Peter, Paul and Mary hearing the whistle blow 160.9344 kilometres; or the Proclaimers proclaiming that they would walk 804.67200 kilometres – and then 804.67200 more. 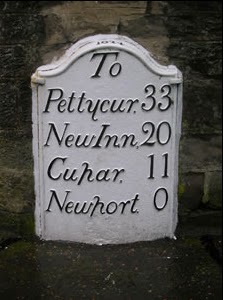 Imagine if, in the Hebridean lament, you 'woke up in Canada 4828.032 kilometres from hame'. It's no further than three thousand miles but it would be a lot less poetic in the telling. 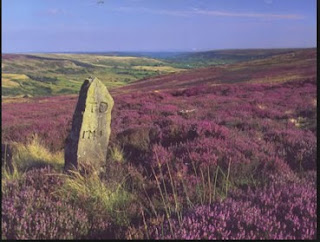 Or if the old philosopher said, A journey of 1609.344 kilometres must begin with a single step. 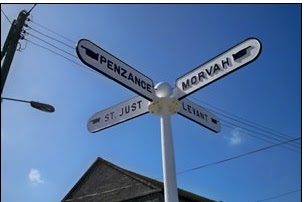 You get the drift – if you have 25g of common sense.

I was taught imperial measurements at school and although I can use metric equivalents I always have to make the translation – divide by x, multiply by y (or is it the other way round?). I will never think in metric.

Language would be less picturesque without these phrases: 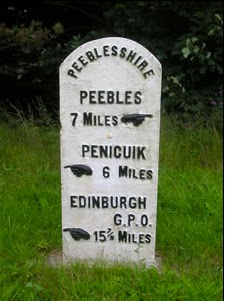 given an inch you’d take a mile

I was miles away. 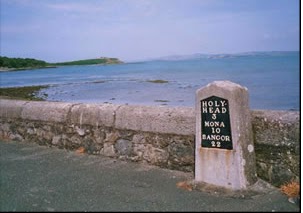 Many thanks to www.milestonesociety.co.uk for permission to use their images*. Before I started this blog post I had no idea there was a Milestone Society – wonderful stuff. There’s a whole new vocabulary there – wayside markers, waymarkers, finger posts, turnpikes; and fascinating history – 117 Roman waymarkers still exist and around 9000 other milestones, but most were removed during World War II and not replaced. Check out the links on the website too, including one to wayside verse.

* except the first picture of the Sarum stone which is from http://www.mere-wilts-heritage.info
Posted by Kate Blackadder at 03:11 2 comments:

I read seven books in July. 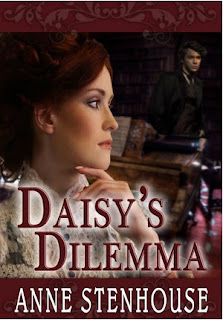 Daisy’s Dilemma by Anne Stenhouse
Read on Kindle. I am a fan of Anne Stenhouse’s Regency novels (read my interview with her here)  – Mariah’s Marriage and Bella’s Betrothal preceded this one. Daisy’s Dilemma picks up a character from the first book – which is great because Daisy is the sort of girl about whom you find yourself wondering what she might do next.

This has all you want in a Regency novel – a heroine with a mind very much her own, a hero made of flesh and blood, and a villain. It also has an intricate plot that takes the reader from the great family house in Grosvenor Square to the London docks – with a dash of Scots mist thrown in. Do find out more for yourself. 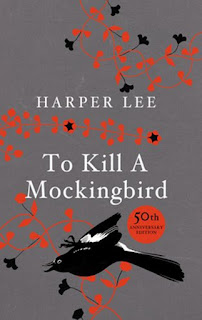 To Kill a Mockingbird by Harper Lee

Blogged about To Kill a Mockingbird and Go Set A Watchman here. 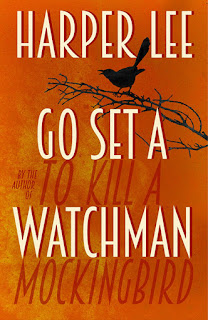 There was a plethora of reviews right away after the publication of this book. I gathered that some of them were adverse, and some a lot of hot air, and decided not to read any of them in advance, if at all. Well, I loved GSAW – mostly. It was wonderful to see Jean Louise Finch all grown up and to revisit Maycomb. I can see though why Harper Lee’s editor suggested going away and writing a book through the eyes of six-year-old ‘Scout’ because many of the scenes in GSAW are flashbacks to the childhood of this ‘juvenile desperado, hell-raiser extraordinary’. Hers was a story that had to be told.

The last few chapters are less like a novel and more of a very long argument between Jean Louise and her father Atticus about the relaxation or not of segregation. As for Atticus taking the opposing view – well, this is a novel that might never have seen the light of day (controversy surrounds the circumstances of its publication); Harper Lee made Atticus’ views quite different in To Kill a Mockingbird. Let us remember him from that (looking like Gregory Peck of course). 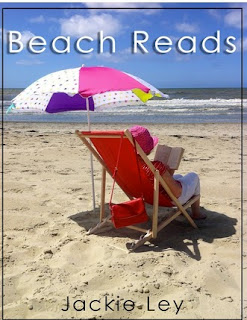 Beach Reads by Jackie Ley
Read on Kindle. An award-winning writer, Jackie was in the Edinburgh Writers’ Club for a couple of years before moving to France so I was interested to read her enjoyable book of four short stories, one of which is a fictionalised account of that move, and was a runner up in the Society of Women Writers & Journalists Life-Writing Competition. The second is also set in France and inspired by a painting. The third – perhaps not a typical ‘beach read’ – has a character receiving a cancer diagnosis and the fourth is about a teacher trying to interest a class in Jane Austen. Find out more about Jackie, her short stories and novels, here. 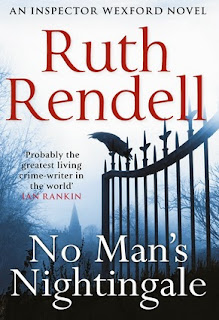 No Man’s Nightingale by Ruth Rendell
An Inspector Wexford – except that he is now retired but gets involved anyway in the murder of the local vicar. Excellent, almost as good as my favourite Wexfords A New Lease of Death and The Speaker of Mandarin. Very sad to think there won’t be any more. 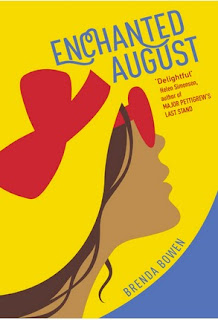 Enchanted August by Brenda Bowen
Read on Kindle. The Enchanted April by Elizabeth von Arnim was published in 1923 and made into a film in 1991 with a cast including Miranda Richardson, Joan Plowright, Jim Broadbent and Josie Lawrence.

This is a contemporary version, set in an island off Maine. The location immediately attracted me (I have a thing about American places/names) and the thought of vicariously pitching up there to stay in an idyllic cottage for a month was very enticing. But I was disappointed when the ‘cottage’ – like all the others on the island – turned out to have about twelve bedrooms and was flimsily built (only for summer use; you’d freeze there in the winter).

Some of the characters were unappealingly modern such as the financial whizz who wondered how the island might be ‘monetized’, and there was a lot of faffing over cell phone signals (something lucky E von A didn’t have to worry about) but it must have been fun to follow a blueprint of someone else’s plot; it was quite fun to read. 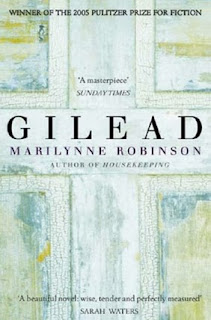 Marilynne Robinson wrote Housekeeping, published in 1980 and later made into a film by Scottish director Bill Forsyth.

There followed a long gap before Gilead was published in 2004. It won the Pulitzer Prize. It will not be everyone’s cup of tea but I loved it. It’s one long ‘letter’, from a Presbyterian minister, John Ames, in 1950s Iowa  (in the fictional town of Gilead) to the son of his old age; he knows he will not live to see the boy grow up. One of his preoccupations is his namesake, the wayward son of his oldest friend, whose unexpected visit home is testing for everybody around him.

I read it when it came out. I later acquired the two sequels Home and Lila. As I am very much looking forward to seeing Marilynne Robinson at the Edinburgh Book Festival I reread Gilead and will read the other two straight after.

There is something thrilling about song titles with American place names. This is my Stateside road trip, embarked on without leaving my chair:

24 hours from Tulsa
By the time I get to Phoenix
California girls
Chatanooga choo choo
Do you know the way to San Jose?
Galveston
Georgia on my mind
Hotel California
(Is this the way to) Amarillo
It never rains in Southern California
Let’s go to San Francisco (Be sure to wear some flowers in your hair)
Midnight train to Georgia
New York, New York
Rainy night in Georgia
What made Milwaukee famous
Witchita Linesman

Songs with Inverness (where I was born) and Edinburgh (where I live now) in the title, or even songs about those fair cities, are rare and not well-known – perhaps because the names are difficult to find rhymes for, unlike eg Aberdeen or Dundee. 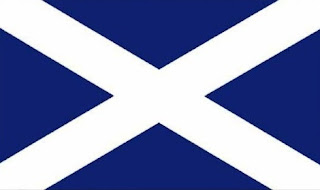 There are plenty of songs about Scottish places though – from this website you can click through to the lyrics:
http://www.rampantscotland.com/songs/blsongs_index.htm

Or we could have an American/Scottish mash-up:

Is this the way to Edinburgh
What made Bruichladdich famous
New Deer, New Deer
Hotel California [the one near Grangemouth]
California girls [ditto]
Gairloch on my mind
Wishaw linesman
Let’s go to Fort William (be sure to pack your rainmate and your wellies)
Rainy night in – well, anywhere in Scotland this summer
It never rains in – hmm, no, that’s not going to work

What would your mash-up song title be?

Posted by Kate Blackadder at 09:49 No comments: