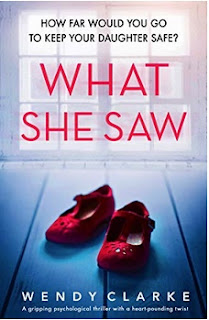 What She Saw by Wendy Clarke
Psychological thrillers can be frustrating in one way – as in a gothic novel when the heroine will insist on opening the door to that room she’s been told to keep away from, there’s always a woman in a psychological thriller at whom you want to shout: ‘What are you thinking? Don’t do it!’ I had a binge on them at one point but haven’t picked one up for a while.
But I wanted to read this one as it is the debut novel by very successful magazine-story-writer Wendy Clarke, who I had the pleasure of meeting at a conference a couple of years ago.
‘Everyone knows Leona would do anything for her daughter, Beth: she moved to Church Langdon to send Beth to the best school, built a business to support them and found the perfect little cottage to call home. … But Leona never talks about why they moved to the Lake District. … When Leona answers the phone one morning, her heart stops as she hears a voice from her past. … She’s given her daughter everything, but now she must tell her the truth.
It’s difficult to review a novel in this genre without giving spoilers so I will just say that I found it page-turning and my heart beat ever faster as the story went on. My favourite aspect of it was the amazing sense of place. It’s set in the Lake District and you feel you are actually there among the mountains and the tarns. It makes a brilliant backdrop to the unfolding drama. 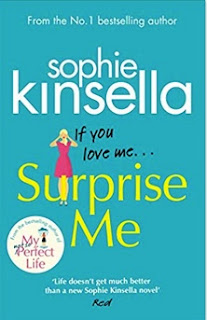 Surprise Me by Sophie Kinsella
A new SK is a treat and this one was no exception.
‘After being together for ten years, Sylvie and Dan have a comfortable home, fulfilling jobs, beautiful twin girls, and communicate so seamlessly, they finish each other's sentences. They have a happy marriage and believe they know everything there is to know about each other.’
But Dan is keeping a secret from Sylvie and I would defy anyone to guess what it is. Here is the trademark Sophie Kinsella mix of real emotional problems and laugh-out-loud set pieces – the latter achieved I think by piling up the absurdities, then putting even more on top (in this book, for example, the revolting takeaway breakfast). 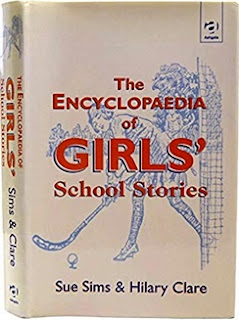 Encyclopaedia of Girls’ School Stories by Sue Sims and Hilary Clare
I thought I knew the world of girls’ school stories but no, I’d never even scratched the surface until reading this. An amazing resource of the genre and, moreover, a great social history. I found my copy in a charity shop for £5.00. I’m afraid they are rather more expensive online … 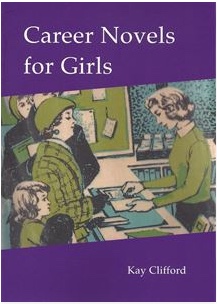 Career Novels for Girls by Kay Clifford
Another round up of books for girls, another great social history; this one is by Kay Clifford who has the largest collection of such books in the world (lucky her). The career novel genre was in its heyday in the fifties and sixties and the titles include Sally Grayson: Wren; Sarah Joins the W.R.A.F; Sheila Burton: Dental Assistant; Joan goes farming. Other titles encouraged girls to become journalists, nurses, librarians, beauty students and secretaries.
What they all had in common was the clear message that the ‘career’ was a stopgap, to be given up when our heroine married Him; they all end with a proposal/engagement/at the altar. Kay Whalley dissects the books in what I would describe as an affectionately sarcastic tone; it must have been terrific fun to write. (Now out-of-print.) 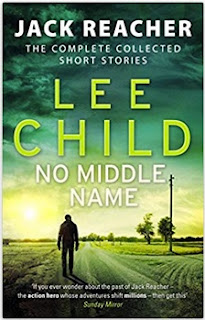 No Middle Name by Lee Child
Short stories all featuring Jack Reacher in some way. Some take him back to when he was an army child and then a young man, even then ever-ready with his fists for a just cause. Yes, some pretty unbelievable and over-the-top storylines but that’s why every nine seconds someone in the world buys a Jack Reacher book. 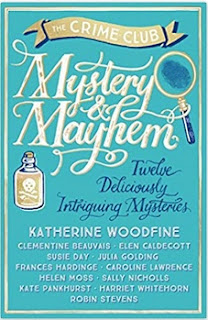 Mystery and Mayhem: Twelve Deliciously Intriguing Mysteries by Katherine Woodfine et al
Aimed at 10+ age group and that includes me, doesn’t it? A terrific selection of contemporary and historical detective stories, some with an edge of magic, with heroines and heroes as brave and resourceful as we like them to be. 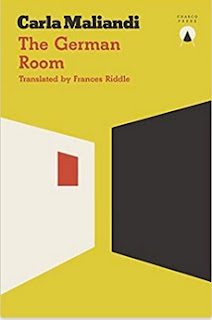 The German Room by Carla Maliandi; translated by Frances Riddle
Read for book group, on Kindle – a novella. The narrator, in her early thirties, travels from Buenos Aires to Heidelberg, where she lived for a while as a child, to get over the break-up of a relationship. She somehow finds a room in a students’ hostel/hall of residence and goes on to meet a diverse group of people including an old family friend, a fellow countryman, a Japanese girl and that girl’s mother – hard to say more without spoilers.
I wasn’t fully on board with the end of the book but I enjoyed what the publishers call this ‘non-coming of age novel’ and would read this author again.