A Penchant for Pencils

One of the books I read in May (of which more in a separate post) was Between You & Me: Confessions of a Comma Queen by Mary Norris. She has spent more than thirty years in The New Yorker’s copy department. Her descriptions of some of the most common problems in spelling, punctuation, and usage – and how to fix them – are made in an amusingly helpful manner. 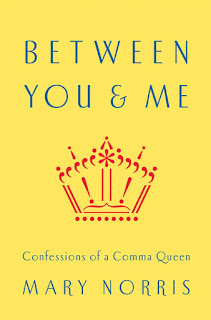 I fell out with her over her objections to putting a hyphen in ‘coworker’ but I completely forgave her when I read the chapter – yes, a whole chapter – on pencils and pencil sharpeners called Ballad of a Pencil Junkie.

I was soooo jealous to find out that in her early days at The New Yorker: ‘There was an office boy who came around in the morning with a tray of freshly sharpened wooden pencils.’

Obriously that doesn’t happen anymore … and I totally empathise with her current frustrations over having to use pencils which are lovely and pointy when new but whose lead breaks the first time they are sharpened. Is the pencil the problem, or the pencil sharpener?

After I read that bit I stopped and counted up the number of pencils I had that were in various stages of bluntness – there were EIGHTY-EIGHT.

Pencils are a cheap and useful souvenir –eg I have pencils from the Giant’s Causeway; Ellis Island; the 9/11 memorial; the Louisa M. Alcott House in Concord; Holland; the pencil museum in Cumbria; a Caledonian McBrayne ferry; the Imperial War Museum; Liverpool Cathedral; the National Library of Scotland; and (my favourites) three from the shop of the Rhode Island School of Art and Design which are pure graphite (when I dropped one of them it snapped clean in half).

A pencil is my writing implement of choice for shopping lists, other lists, lists of lists … And I love my laptop but if I get stuck when writing a story, or I want to write somewhere I don’t have the laptop with me, I reach for paper and pencil. The brain can make connections on paper that it doesn’t onscreen, plus it’s easier not to listen your inner editor and keep going, rather than polishing sentence by sentence.

I kept reading snippets out to my ever-patient husband:

‘guess what, there’s a pencil sharpener museum in Logan, Ohio’

‘David Rees “specialises in the artisanal sharpening of No 2 pencils” and charges $15 a time’!

When I came to Mary Norris’s advice on what constitutes a decent pencil sharpener (an all-metal industrial strength X-acto, Boston Ranger 55) he must have detected a longing tone in my voice because he asked me if I’d like one as a birthday present. 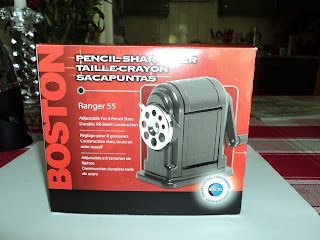 Who needs chocolates or roses? Lovely though they both are at the time, ultimately, they: make you spotty/wither.

A pencil sharpener, securely attached to the desk, is for life, not just for the end of May. 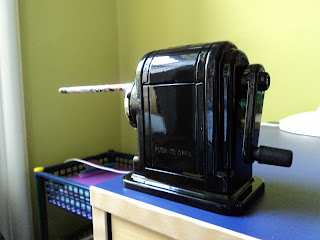 Pardon? Well, thank you very much for your advice but I have got a life actually.

It happens to be one that happily embraces punctuation problems and – oh joy! – it now includes 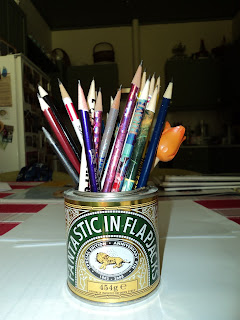 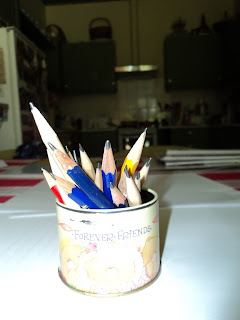 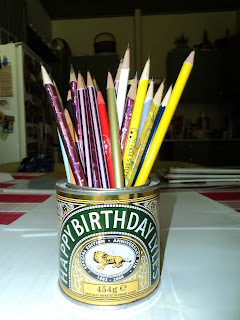 Posted by Kate Blackadder at 10:21