I read seven books in September. 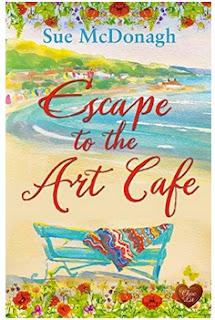 Escape to the Art Café by Sue McDonagh

Read on Kindle – but isn’t that a gorgeous cover? From a painting, I believe, by the (clearly multi-talented) author. This series, of three so far, has been on my radar for a wee while so why I chose to start with the third one I don’t know. I guess my brain has gone on furlough.

But I don’t think it matters – the place is the anchor to the series rather than a particular character. And that place is the Gower Peninsula in Wales, a place I have wanted to visit ever since reading a book by Susan Howatch many years ago. Can’t remember the title or anything about the characters or plot but the miles of golden sands have stayed in my mind.

What a lovely place to have a café … with hot chocolate and cake to die for too. Into this idyllic scene comes Flora, on the motorbike she’s stolen from her cheating ex-boyfriend, to stay alone in the holiday cottage they were supposed to be in together. She soon becomes part of the local community and, unsurprisingly, doesn’t want her holiday to end … 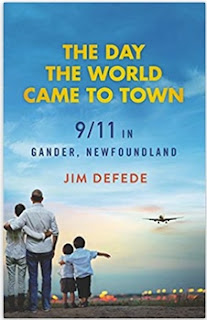 The Day the World Came to Town: 9/11 in Gander, Newfoundland by Jim Defede

Talking of holidays … on 11 March this year Mr B and I were to be going to London for a week to visit relatives and do lots of Londony things. A few days before, we both realised that we were more apprehensive about going than looking forward so we cancelled. A good decision in retrospect.

Had we gone, we planned to try and get last-minute tickets for Come From Away, the musical based on The Day the World Came to Town. Ah well.

Immediately after the attack on the World Trade Centre in 2001 no flights could land on US soil and had to return from whence they came or go elsewhere. Many were diverted to Gander in Newfoundland, Canada, a small town that suddenly had to find accommodation and sustenance for several thousand people (who, for all they knew, could have included potential terrorists). This they did with great generosity and friendliness – truly a story to restore your faith in human nature. 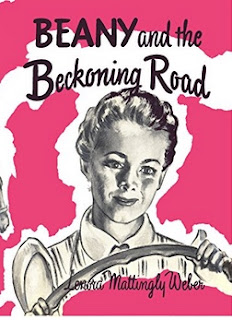 Beany and the Beckoning Road by Lenora Mattingly Weber

I wrote about discovering this series here. In the fourth book Beany and her brother are in charge of taking their small nephew back to his parents a couple of states away. With some unexpected passengers, including a horse in a trailer, and a dwindling supply of cash, it’s a preposterously eventful journey for the teenagers. 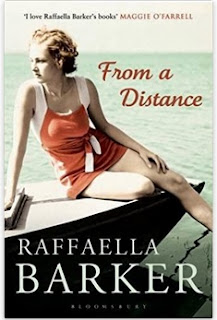 From a Distance by Rafaella Barker

I loved RB’s early books (especially Hens Dancing, Green Grass and Summertime) but her most recent couple not so much. The title of this one reflects how I found reading it – as if I couldn’t see the characters very clearly. It’s set just after the end of WW2 in Cornwall and in Norfolk fifty years later (which should have been 1996 but mobiles, Skyping and social media were much in evidence so that didn’t add up). The cover bears no relation to the story. However, as always, her actual writing is gorgeous especially in its descriptions of landscape. 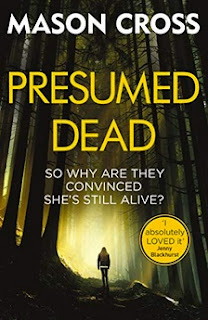 Like many social activities, meetings of Edinburgh Writers’ Club have moved online for the duration. Our first zoom worked well. The opening speaker was thriller writer Mason Cross and he was terrific. Not his real name – he’s from Glasgow – but most of his books are set in America so his pseudonym reflects that.

He has a series involving a ‘people finder’ called Carter Blake which has been compared to the Jack Reacher titles and carries an endorsement by Lee Child. So I had to investigate and I wasn’t disappointed.

Presumed Dead is the fifth in the series but they don’t have to be read in order. I thought it was great so I immediately downloaded the first one … 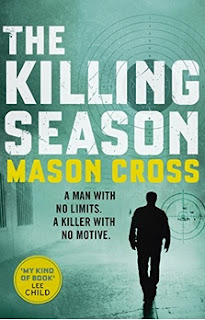 The Killing Season by Mason Cross

So I am looking forward to reading more by him in this series, and other titles for which he uses a different pseudonym, especially his latest which features a murder on the Caledonian sleeper train. 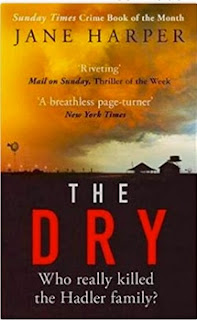 The Dry by Jane Harper

Still in murderous mode. This was passed on to me by my sister. It’s set in a small town in rural Australia. A family is found murdered. It’s presumed that Luke murdered his wife and little boy and then shot himself, but his childhood friend Aaron, home for the funeral, finds that difficult to believe. I started reading this at 3 o’ clock one afternoon and, with a break to eat and be reluctantly sociable, I finished it at 10.30.

You can take that as a recommendation.