In 2008, as a member of Edinburgh Writers’ Club, I was entitled to go to the conference of the Scottish Association of Writers’ Conference. One of their competitions that year was to write the first instalment (7000 words) of a serial for The People’s Friend.

At that time, once a month, I met up with four writing friends and we took turns to provide a prompt or an exercise from which we would write for twenty minutes or so and then read our work aloud. One month our hostess, Vicki (now acclaimed novelist Victoria Hendry), handed out some paperbacks of various genres and asked us to select a page at random, look at the first line and use that to start our own piece. I can’t remember the title of my book but it was a horror story; the line I picked out was about a woman driving in the rain. I decided she was travelling up to the very north-west of Scotland and (although I don’t even read horror never mind write it) I vaguely had in mind that she was on her way to some pagan ceremony which would end badly. I called the scribbled piece The Stone Mother without having any idea what that meant.

When I read about The People’s Friend competition I thought of that piece of writing and how I might take it further. My heart had never been in pursuing the pagan ceremony idea and of course The People’s Friend doesn’t do horror … So the woman in the car with her windscreen wipers working overtime became an archaeologist en route to join a Viking dig and I came up with a cast of characters for the community she was going to be living in.

(If anyone wants to take up The Stone Mother and go off to a horrorific pagan ceremony be my guest.)

No one was more surprised than me when I won the competition. I had not thought beyond that first instalment and it was both thrilling and frightening to realise I had a commission to finish the serial. But before it could be taken any further The People’s Friend wanted some changes – some scenes swapped around, there were too many single people, one character was over-the-top … and I had to produce a complete synopsis of the rest (five or six instalments of 5000 words each). I’d had some short stories published before but had never written anything of length so this seemed an impossible task – like going into a dark room full of people I’d never met and being expected to know them. It took me weeks.

At one point I really thought I couldn’t do it and had to give myself a severe talking to; it would have been so stupid not to grasp the opportunity offered to me. Eventually I produced an A4 page for each of the next six instalments, broken down into five chapters/scenes and once that was all approved I was off – and it was great, rather like joining the dots. I had a blueprint in front of me to follow.

I submitted the second instalment, waiting for their approval/comments before beginning the next one. It was quite a long process but at last The Family at Farrshore was published in The People’s Friend in 2011 and then I sold the large-print library rights to Linford Romance Library (an imprint of Ulverscroft).

Cathryn is delighted to join an archaeological dig at Farrshore, in the Scottish Highlands. Apart from her professional interest, it means she’ll be at a distance from her recently ex-boyfriend, Daniel. Canadian Magnus Macaskill, is in Farrshore for his own reasons, one of which is to trace his ancestry. As they spend the summer lodging with the MacLeod family, Cathryn and Magnus are drawn into the small community and to each other. But how will Cathryn react when Daniel reappears? 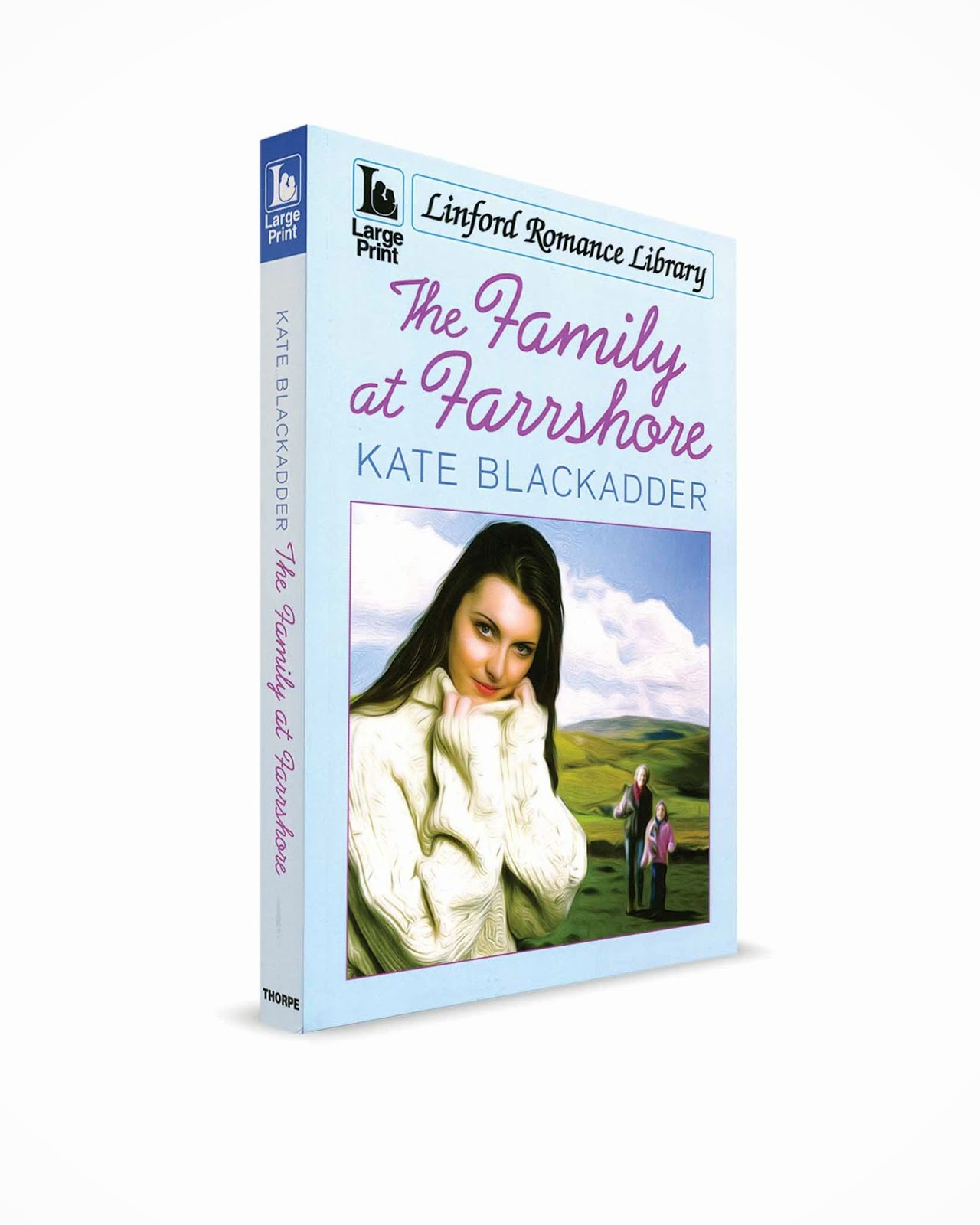 In 2013 The PF’s Fiction Editor Shirley Blair asked me if I had any other ideas for a serial (I don’t know why it hadn’t occurred to myself to start another one). I gave her two suggestions and she went for one with a hotel setting. This time she didn’t ask for the full synopsis but she queried the timeline I was proposing so I did do a plan to show her how it would work. It can be tricky – you send off an instalment and in the weeks before you get a reply your head is in another story and then you have to reacquaint yourself with your serial characters – but I did find it easier the second time round. The Ferryboat began last week (23 August 2014), the first of six instalments. 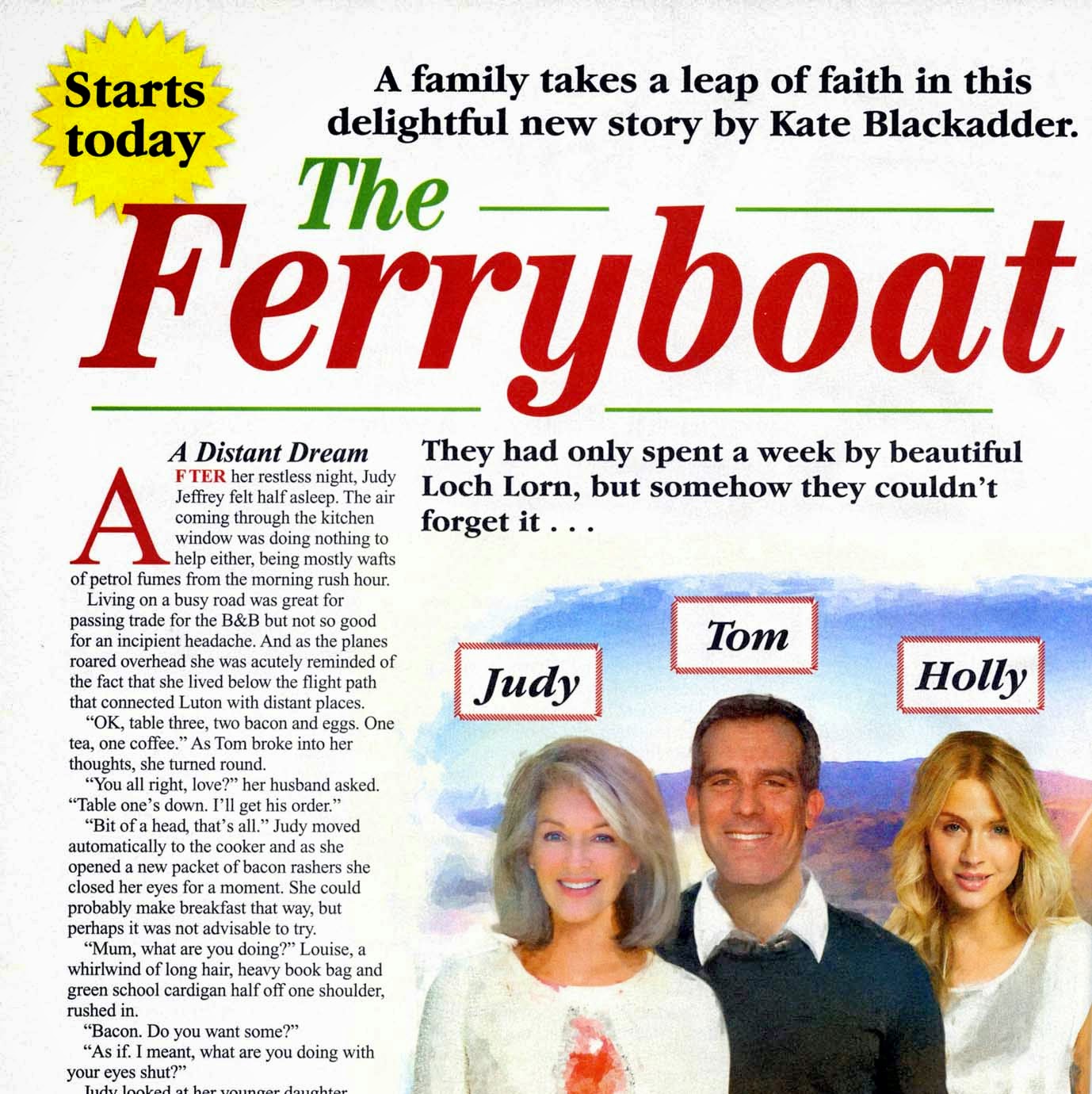 I’ve sent another serial idea for Shirley to consider … watch this space.

I read seven books in July, the first five of these on Kindle.

Ready or Not? by Grace Wynne-Jones. Irish writer with a sharp eye on modern relationships, and heroines who are neither chicks nor hens but somewhere in between. 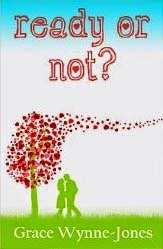 Fashionably Brief. Short stories by The Romaniacs, a group of romance writers. As I am Facebook Friends with some of these lovely ladies I will refrain from picking out my favourite stories. A great collection for less than the price of a cup of tea.

The Golden Hour by William Nicholson. I love William Nicholson’s novels (he also writes children’s novel, plays, and screenplays (eg Shadowlands). This one includes some characters from previous ‘Edenfield’ novels so I enjoyed catching up with them. He’s very good on writing about women … and children ... and men ... even the guinea pigs seemed real.

What the Future Holds by Joan Fleming. This is Scottish writer Joan’s debut novel, set mostly on the Isle of Mull and with a wonderful sense of place. Amy remembers the kiss she and Sandy shared when they were teenagers but now there’s Amy’s partner Matt in the picture … 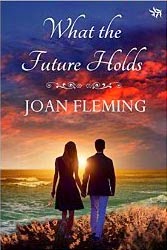 Tears and Laughter and Happy Ever After. A collection of tales from writers who between them have had hundreds of short stories published in women’s magazines in the UK and around the world.

Murder on a Summer’s Day by Frances Brody. The latest in the Kate Shackleton investigator series, set in the 1920s. This one is about the death in Yorkshire of a visiting Maharajah. A longer and slower read than the previous titles but enjoyable nonetheless.

The House at Sea’s End by Elly Griffiths. Gripping story about a forensic scientist who gets involved when the bodies of four long-dead Germans are discovered on a Norfolk beach and everyone who might have information is being silenced, permanently. Tense and page-turning plotting – although I’m still wondering why ancient Irene was upstairs in the tower in the wee small hours.

Only seven? Must do better next month.
Posted by Kate Blackadder at 00:40 No comments:

Class of ’64 is my sixteenth story to be published in The People’s Friend – in this week’s issue (dated 9 August 14). 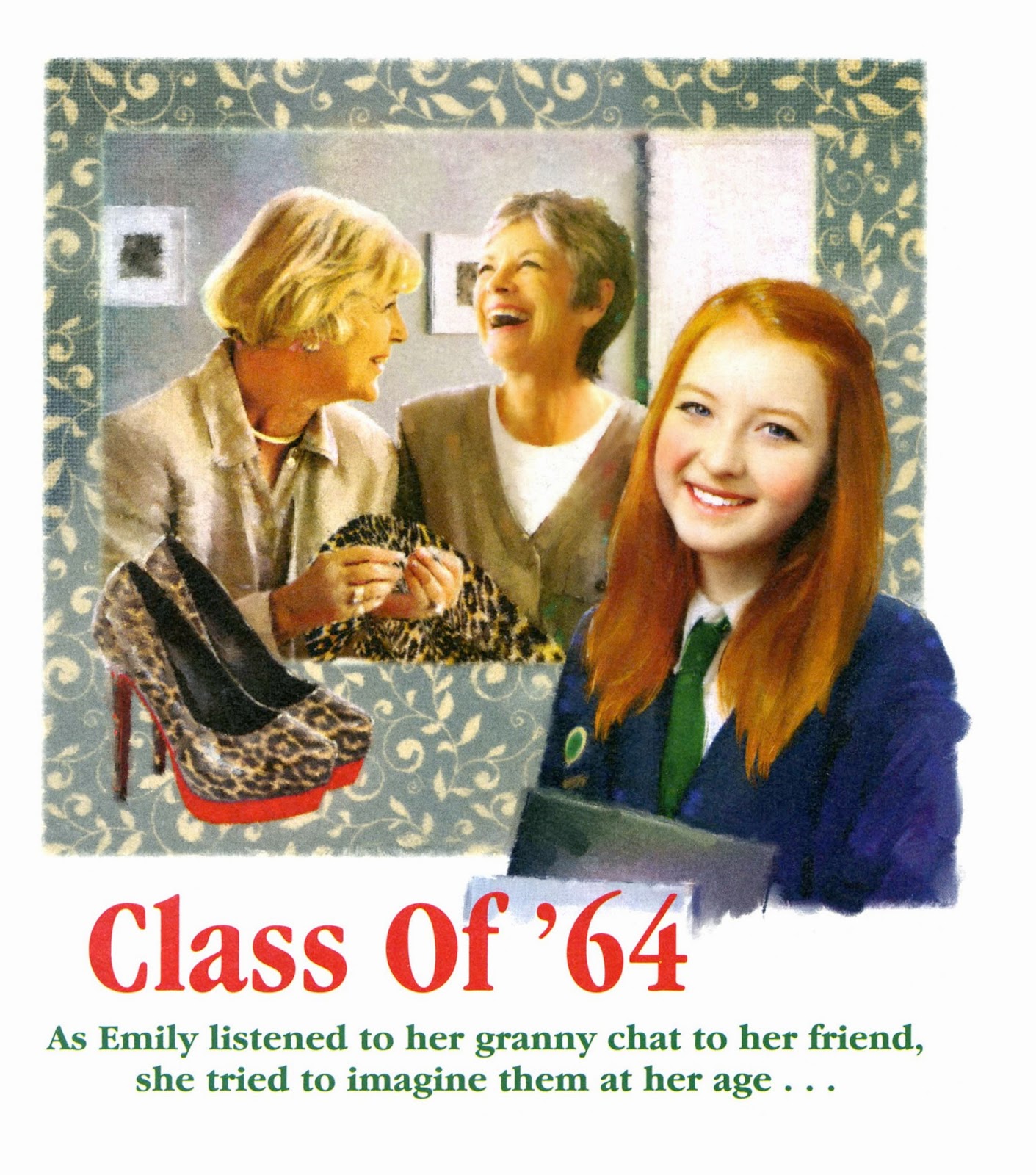 I think it’s my favourite of all my PF stories as it was inspired by a time, many years ago now, when my mum and a school friend she hadn’t seen for fifty years had a reunion in my house. I brought them tea and cake and left them to it and they picked up exactly where they left off, judging by the gales of girlish giggles coming out of the sitting room.

I used that reunion as a starting point and invented characters quite unlike my mother and her friend to put into the situation.

My reunited friends are called Marianne and Kitty. I wanted their meeting to be observed through the eyes of a third person so I made up Emily, Marianne’s eighteen-year-old granddaughter, who ends up seeing her grandmother in a different light, as someone who still feels young inside. Then there’s Marianne’s husband (Emily is surprised when she finds out what her Grandpa’s nickname was when he was a lad) and he was inspired by someone I was at school with myself.

Jack London said: ‘You can't wait for inspiration. You have to go after it with a club.’ Well, he was that sort of guy.

I don’t find the getting inspiration bit difficult, quite the opposite – in fact, inspirations hit me with clubs and shout 'write about me'.

It's what comes next that's tricky. To paraphrase Thomas Edison: ‘Writing a story is one per cent inspiration, ninety-nine per cent perspiration.’ I just wish it was the other way round.