It’s a wee while since I was a teenager … but I plumbed the depths of my memory to write Back to the Sixties, a short story which is published in The People’s Friend this week (issue dated 19 October).
They have given it a lovely illustration complete with LPs and a portable record player, a Jackie annual and of course some pin-ups. (The story is set in the 1990s and the character is looking back to being fourteen.) 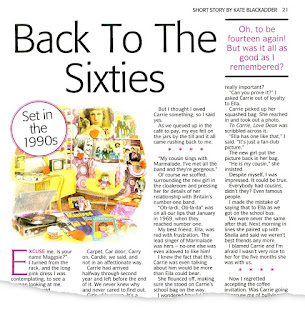 What sparked the story was meeting up with old schoolfriends (well, not old old obviously … ) and reminiscing about the discussions in the girls’ cloakrooms on Friday mornings after an episode of Top of the Pops the previous evening, and on Monday mornings after the new Top 20 was announced on Sunday. Goodness, teenagers nowadays don’t know what they’re missing … these things were crucially important.

Some of my classmates were fanatical about particular stars and regarded them as their own property – no one else was allowed to even like them.

No internet to trawl back then – information on our heroes (and the glossy pix to pin up on our walls) came from magazines such as Jackie and Fab 208. I remember one girl in tears when she found out that Glen Campbell was married – he was supposed to wait for her; and another loudly jubilant when Dean Ford and Marmalade got to number one with Obladi Oblada. Andy Fairweather Low from Amen Corner and Steve Ellis from Love Affair were other jealously guarded favourites.

And yes, as in my story, there was one brave lass who held out for Andy Stewart …

My own pop pin-up was Peter Noone from Herman’s Hermits (There’s a Kind of Hush, Something is Happening, My Sentimental Friend – I remember most of the words; do join in) and many years later did actually see him in concert in Edinburgh when he was on a Solid Silver golden oldies tour. He hadn’t changed that much: Peter Pan rather than Peter Noone, a fact commented on with envy by a couple of his fellow performers.

I’d changed of course – and thank goodness, because who would like to stay fourteen for ever? Apart from pimples and general awkwardness, there was the way you were treated by adults – you were old enough to be sensible apparently but far too young to do anything you really wanted to do.

There were non-pop pin ups too – James Drury who played the lead in The Virginian (the American western TV series; my sister and I preferred his sidekick Trampas after whom we named a collie); William Shatner from Star Trek; and footballers George Best and ‘Scotland’s George Best’ Peter Marinello. Weirdly (I think now) we were all interested in football and I recorded the Saturday results in my diary. A story subject for another time perhaps.

Who was your pin-up? (You are not allowed to have Peter Noone, remember … )
Posted by Kate Blackadder at 03:24 6 comments: