I’ve just finished reading the very enjoyable Water’s Edge and as I know the author, Jane Riddell, through the Edinburgh Writers’ Club, I was able to ask her some questions about her work. 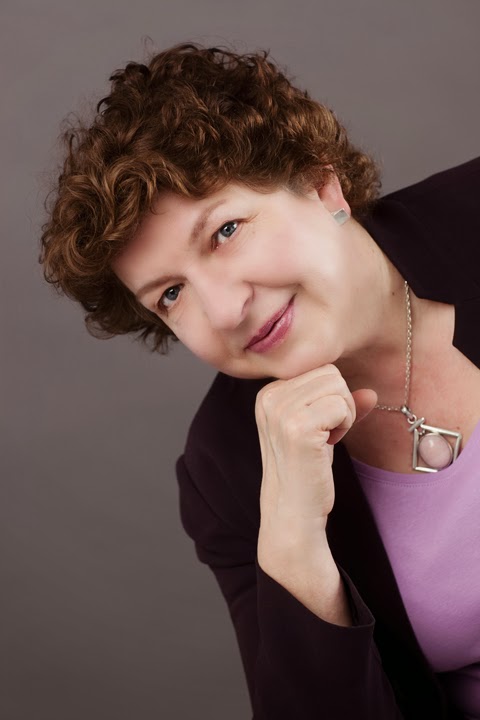 Congratulations, Jane, on the publication of Water’s Edge.

Can you pitch the book to us – in 140 characters?
What a challenge!  Okay, here goes:

Set in Switzerland, Water’s Edge is a contemporary drama where secrets, guilt and regret turn a happy family reunion into a stormy one. 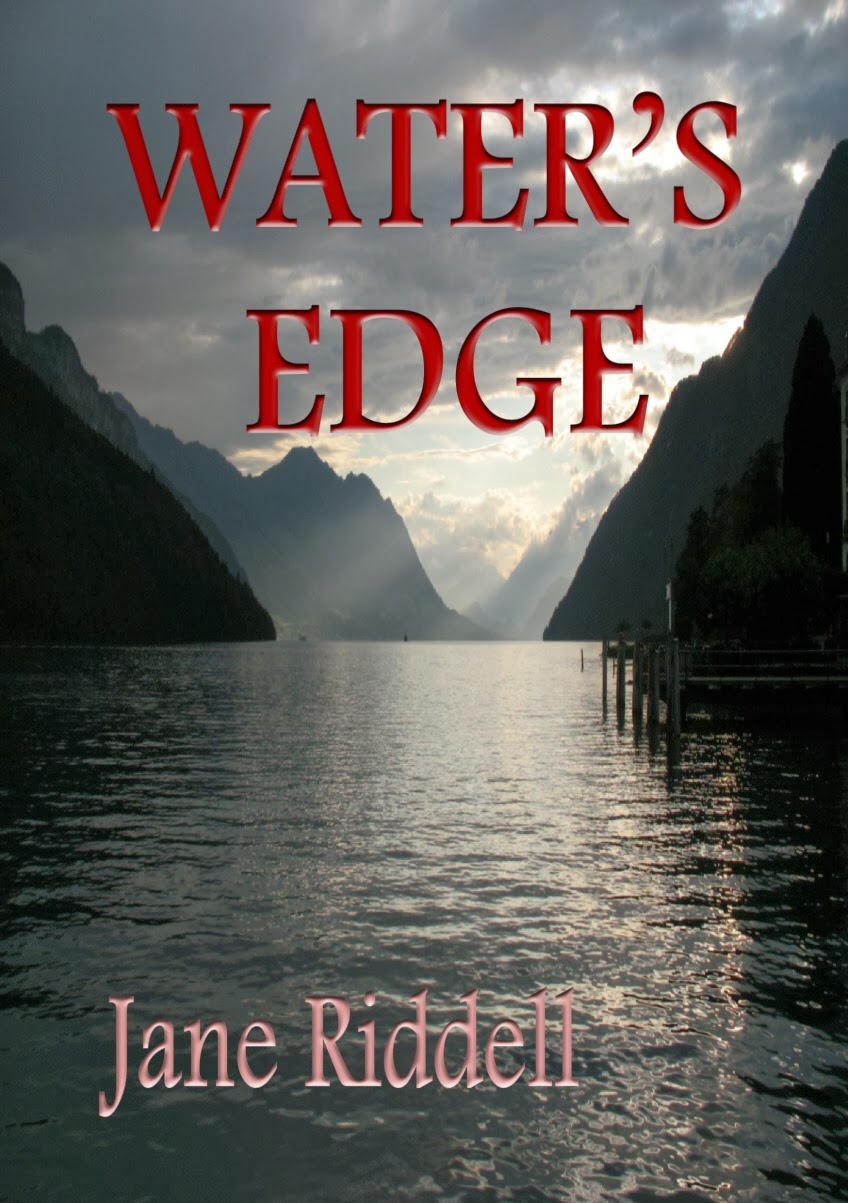 Water’s Edge is published by ThornBerry Publishing. How has the publishing experience been for you?

The most positive thing about being published is the boost in self-esteem and self-belief.  For years, every time I described myself as a writer, I felt like a fraud.  This no longer happens.  The first few days after I heard that ThornBerry wanted to publish my book, I wandered around with a cosy little glow inside me.  It was lovely.

What has been a surprise is the amount of effort I have to make in order to promote my book. I was naïve enough to think that once I was published, the work was done and the royalties would roll in.  In fact, as my publisher told me, the hardest part today is not getting published, it’s selling your books.  Consequently much of my working time is now spent on promoting/marketing Water’s Edge, involving learning another set of skills.  I liken it to starting a new job with no induction, training, supervision or guarantee of a salary.  Over the last year or so, I’ve learned much about how to promote myself, and am now more realistic.  It does involve time and uncertain outcomes, but there’s a pleasant side to it, for example, at the moment I am contacting people on Linkedin to suggest we interview each other or review each other’s books.  This mean I’m getting to know writers from a range of English-speaking countries, all interested in promoting their work.

The book is set in Switzerland – is that somewhere you know well?
I’ve had a few holidays in Switzerland, mainly to ski.  As a child, on my first family holiday abroad, we drove to Austria, stopping off in Brunnen, Switzerland for the night.  We stayed in the wonderful old Waldstätterhof Hotel, (featured in Water’s Edge, but not Madalena’s hotel).  Amongst other things, I loved the fact that you entered the hotel to hear a pianist in the drawing room.  It wouldn’t surprise me if some day I write a book based on the Waldstätterhof – it lingers in my memory.
Being an enthusiastic traveller, I like to set my novels in other countries.  This allows me to spend ‘head’ time in a sunny landscape, when those around me are enduring yet another blustery, wet Edinburgh afternoon.  After I finished the first drafts of Chergui’s Child, based in the south of France, I thought about having an alpine setting for my next novel.  As I love mountain and lake locations, Switzerland came to mind.  Shortly after, I spent four days in Brunnen.  It was only when I arrived there that I decided to make it the setting for Water’s Edge.  It still intrigues me why I didn’t make the connection earlier!
Did any real-life people inspire your characters?
A few aspects of Vienne’s character are based on me, mainly her health worries, the way she is slow to take reassurance she isn’t ill.  But other than that, not in this novel.

Madalena, Portia, Vienne and Annie each have a ‘voice’ – did that take a lot of advance planning?

It did, yes.  I was aware of the importance of varying the voices, so I spent time thinking about speech patterns, favourite phrases, and the attitudes I wanted to convey.  This is quite hard to do – although you need to incorporate pet words, as with so many aspects of writing, it’s about balance – too many, and it becomes irritating/self-conscious writing, too few, and they’re not enough to depict the character.

Anita Brookner’s Hotel du Lac is mentioned in your book several times. Did you feel that it was the elephant in the room, so to speak – that the Swiss lake-side setting of Water’s Edge would inevitably bring Hotel du Lac to the reader’s mind?

No, I didn’t, but I think that my novel was probably inspired by Hotel du Lac, albeit subconsciously. When writing the first draft of Water’s Edge, I didn’t know that the hotel used in the film version is actually on Lake Luzern.  (In the book, the protagonist, Edith Hope, is exiled to a hotel on Lake Geneva.)

Which do you prefer – the writing or the editing process?
Probably the writing process, especially when ideas are flooding my mind and words haemorrhage out – this happened with the initial draft of Water’s Edge.  Editing is pure slog, although there’s the pleasure of re-reading a piece of text and seeing how it has strengthened.  I’m convinced enough of the value of  a comprehensive edit to have written a small editing guide (Words’Worth: a fiction writer’s guide to serious editing, also published by ThornBerry), but admit to finding the process time-consuming, tedious and hard work.  At least you can edit when you’re not feeling particularly creative/inspired, and know that your book is progressing. 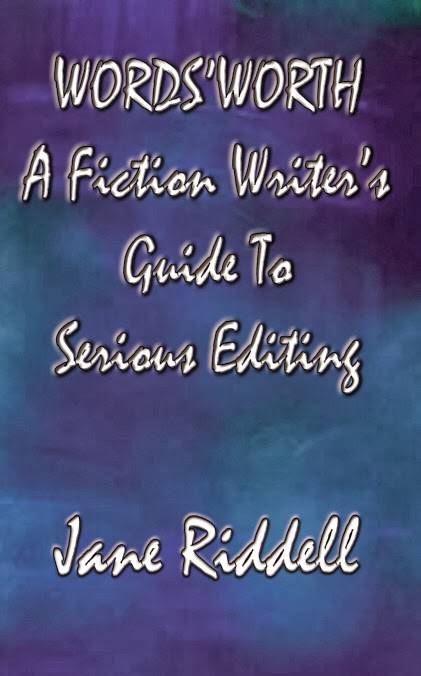 What are you writing now?

I am completing a rewrite of Chergui’s Child.  This tells the story of Olivia who inherits a fortune after her aunt dies, at the same time learning something significant about her past which propels her on a life changing journey.   It should be finished by Easter.
Where can we buy Water’s Edge, and where can we find your website/blog?

Thank you for answering my questions, Jane. Look forward to your next novel.

Those very nice people at Alfie Dog Fiction (one of the biggest short story download sites on the internet) have made me Featured Short Story Writer of the Week. A loud woof woof of thanks to them.

I have five stories on the site. I’ve just been looking at them again and remembering what inspired them.

Angel was a second prize-winner in Writers’ Forum’s monthly competition before being on Alfie Dog. The gestation of this story shows the way the mind can make connections between otherwise very unrelated items and events.

At the weekly (and wonderful) drop-in creative writing class I go to we did an exercise where everyone brought in an object which was passed round for people to feel, with their eyes closed. Someone brought in a glove puppet. It was actually in the shape of a penguin but I thought it was a rabbit. I started writing it in class and finished it at home and somehow ended up with a story set just after the First World War and featuring a toy rabbit, a stone angel and an Ouija board. I find that period heartbreaking – so many bereaved mothers – and fathers – unable to accept their sons were gone.

Molly’s Christmas Candle I wanted to write a Christmas story and remembered nativity plays my children were involved in. I was delighted when this title was chosen to be in Alfie Dog’s recent anthology A Wish for Christmas (in print as well as an e-version). 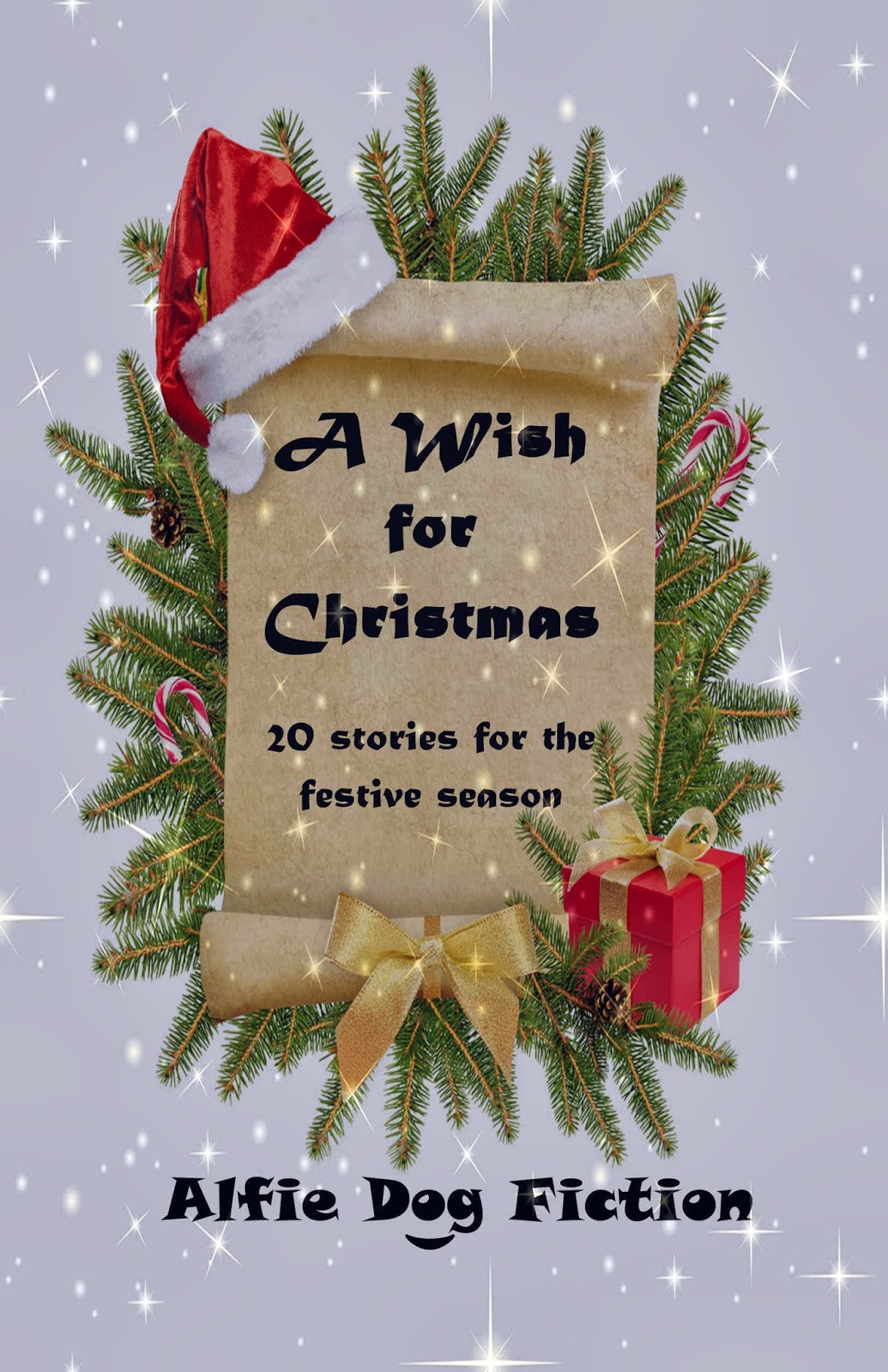 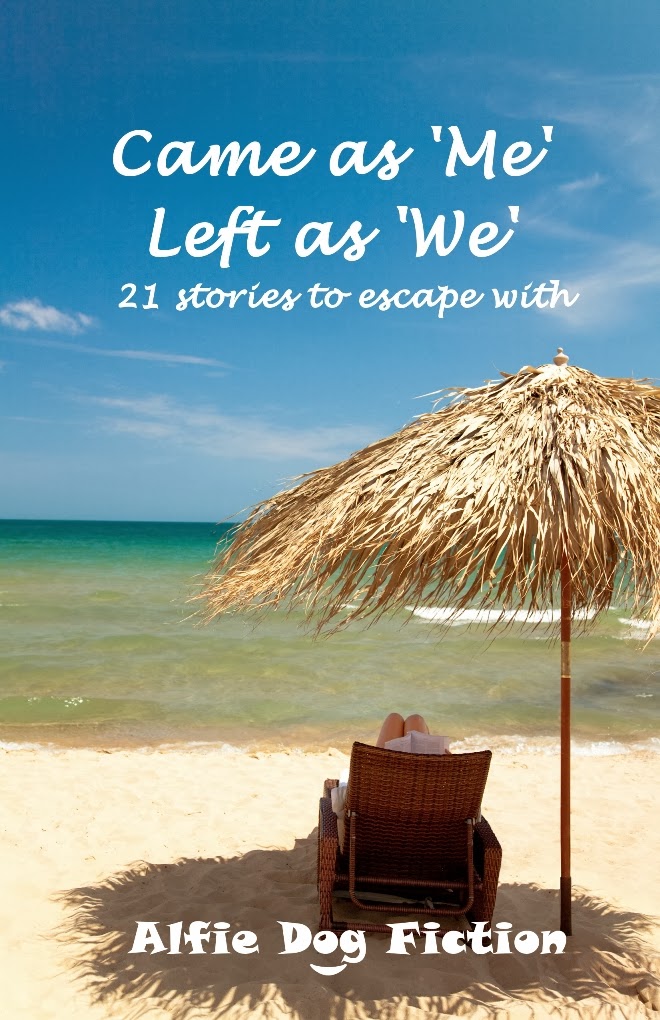 The Real Thing was in Woman’s Weekly too. It was originally written for the Jane Austen Short Story Award and long-listed. It’s about a contemporary Mary Bennett and her gay best friend, Will.

Now, she said, wagging her tale, if you would be so kind, don’t paws, go walkies to the Alfie Dog site, hand them a few pennies and any or all of these stories can be yours to download – and there are another twelve hundred or so to choose from.

And please excuse my puns.

I have a very nice notebook for the purpose of keeping a list of books I’ve read. Unfortunately I hardly ever remember to use it. So one of my New Year resolutions is to keep it in a more handy place and at the end of December to be able to look back over my reading year.

Even without such a record to refer to I know that there is no system to my reading/re-reading. Occasionally I arrange a pile of books beside my bed and vow to read them in the order in which they are stacked. But then, I’ll be scanning a bookshelf and something – new or oft read – catches my eye and that is what I want to read and no other book will do. Or that month’s book group title has to be put to the top of the pile. Or I like a particular book so much all I want to read is something else by the same author. Or I’ve finished a book and don’t want to start a brand new one late at night so reach for an old favourite. So the bedside pile gets scattered and re-formed any old how.

Now there are also e-books … I have a Kindle app on my laptop with, currently, fifty-six titles waiting for my attention. And of course there are all the books I’ve seen reviewed/have been recommended waiting to be bought/downloaded/borrowed from the library.

In a parallel universe I would have a year (or three) off and do nothing but catch up on all of these.

I can’t remember what I’ve read over the whole year but these, not in any order, are some from the last few months, fiction unless otherwise stated:

Gilead by Marilynne Robinson (a re-read)

The Greengage Summer by Rumer Godden (a re-read) 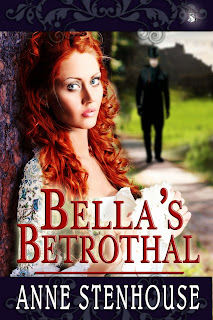 The Complete Book of Aunts by Rupert Christiansen (non-fiction)

The London Train by Tessa Hadley

A Capital Union by Victoria Hendry (for book group) 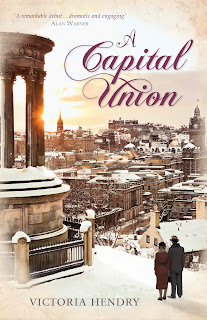 Penny Plain et al by O. Douglas (an O. Douglas (sister of John Buchan) is what I usually reach for as a late-night comfort blanket; her titles are mostly out-of-print but The Day of Small Things has been reissued by Greyladies Publishing. I know them all almost off by heart.)

Princess Tina Annual 1969 (new addition to collection of girls’ annuals; approx 380 so far; planning to blog on this subject soon)

Instructions for a Heatwave by Maggie O'Farrell (for book group)

Face the Wind and Fly by Jenny Harper 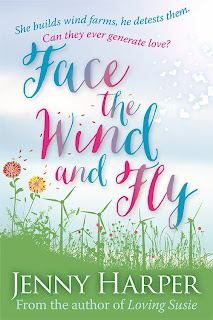 I am currently reading: on Kindle app Carnegie’s Call by Michael Malone, in anticipation of hearing Michael’s motivational talk to the Edinburgh Writers’ Club on 6 January; and in paperback Ruth Rendell’s last Inspector Wexford novel The Vault (I tend to go on a crime-reading spree every January); also enjoying a Christmas present, a huge book on quilts from the American Folk Art Museum.

Now I’m off to rearrange that to-be-read pile yet again and to place the Books Read notebook by its side.

Do you have a reading plan? I would love to know what it is (and if you stick to it).