Today I’m pleased to welcome Patsy Collins onto my blog. Patsy Collins is a novelist and short story writer. More than 300 of her short stories have been published in magazines in the United Kingdom, Ireland, Sweden, Australia and South Africa. She's also written three novels, Escape To The Country, Paint Me A Picture and A Year And A Day. 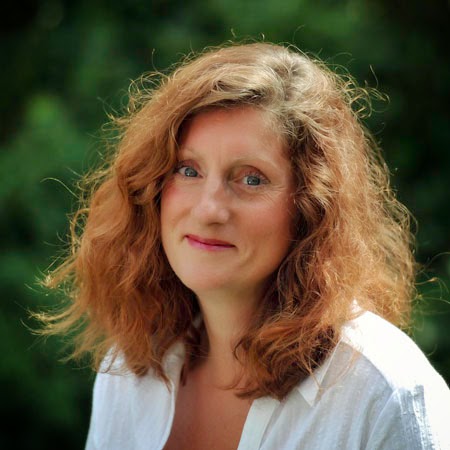 I asked Patsy some questions about her new collection of 24 short stories, Over the Garden Fence. 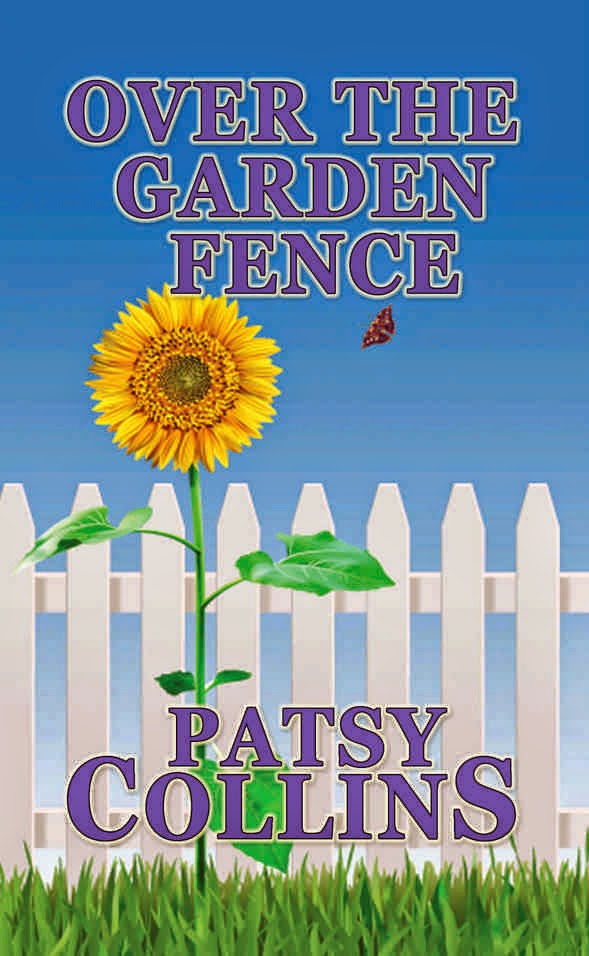 Patsy – were these stories all previously published in magazines or written specially?

Both. As I intend to produce a whole series of these books I deliberately write quite a lot of stories set in gardens or otherwise involving plants. Most have been published in magazines or placed in competitions, though a few are shiny and new.

You’ve cited gardens and gardeners as one source of inspiration – where else do you get ideas? (What a pity ideas can’t be grown from seed like flowers and veg!)

Pretty much anywhere I don't have the means to make a note. Sitting in front of the computer doesn't seem to do it. I need to be digging, or cycling, or baking a cake. One minute I'm wondering if I should sow more lettuce, the next I'm wondering how an imaginary person is going to get out of the mess I've managed to think them in to.

Actually, I think ideas do grow like seeds. We start with a character, or a situation or a setting we'd like to use. That's the seed. If we just leave it there nothing happens, but if we write it down it has the chance to grow. We feed and water it with other story elements until it's flourishing. Then sometimes we have to prune them back!

Gardens/flowers are the backdrop to this collection – but definitely not in a sentimental, roses-round-the-door way. How do you decide that you want, for example, to write a story set in the future, or one that involves magic/black magic?

I don't know. Usually I write about characters who're fairly normal people in contemporary, realistic settings. They might have problems but by the end of the story they've resolved them, or found a way round them and everything ends happily. Sometimes they just won't go like that.

Do you prefer writing short stories or novels?

When a novel is going well I prefer that. When I have an idea I love for a short story then that's what I most want to write.

Which part of the process do you like best – the writing or the editing?

Second draft. At that stage there's plenty to work with, I know where I'm going and I can't help but make it better.

Do you have a writing routine?

Nope! I do write (or edit or some other writerly task) most days and tend to do most of the creative stuff in the morning, but I'm easily distracted. We travel a lot and I sometimes work with my husband, so a fixed routine wouldn't really work even if I was capable of sticking to it.

Thank you for answering my questions, Patsy.
Thanks for inviting me over, Kate. Pleasure to chat to you.

As Patsy says, gardens, plants and people all have their stories. Lean over her garden fence and she'll tell you a few …

Patsy blogs at http://patsy-collins.blogspot.co.uk/ (a mix of interesting words and free-to-enter writing competitions). She has also recently (2015) taken over the popular blog http://womagwriter.blogspot.co.uk/

Buy Over the Garden Fence here.
Posted by Kate Blackadder at 12:41 4 comments:

I read seven books in March, two more than last month. But one was very short and I’d read four of them before … 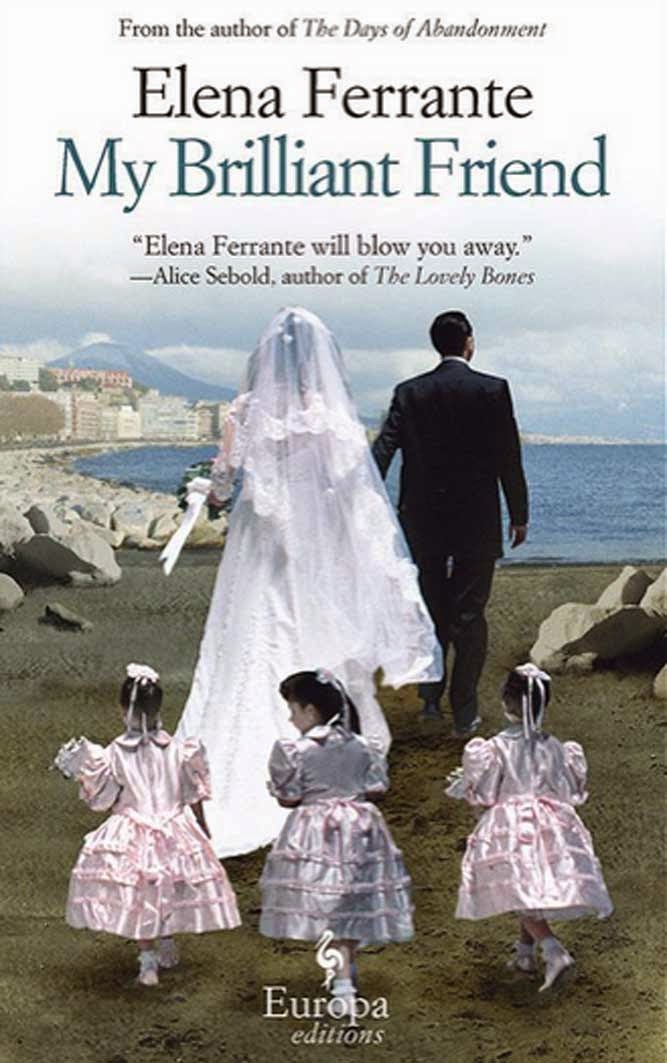 My Brilliant Friend by Elena Ferrante
Read for book group. The first in a series of, possibly, autobiographical novels (the identity of the author is uncertain). The cover does not remotely reflect what the book is about. Two girls come of age in the back streets of Naples in the 1950s. I liked the premise, I liked the setting and the era, I liked the characters – but I won’t be reading any more by this author because I didn’t care for the actual writing. Usually I admire and appreciate spare, economic writing but here there was virtually no flesh on the bones and after a while I longed for some. Others in the group were very keen though so don’t let me put you off.

I was looking at my bookshelves for something else and caught sight of the Carol Shields section and thought I was due for a reread of this late and much lamented Canadian writer. So one after the other I read: 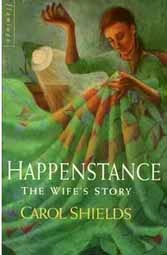 Happenstance
I blogged about this here recently, in a post called Patchwork Pieces. 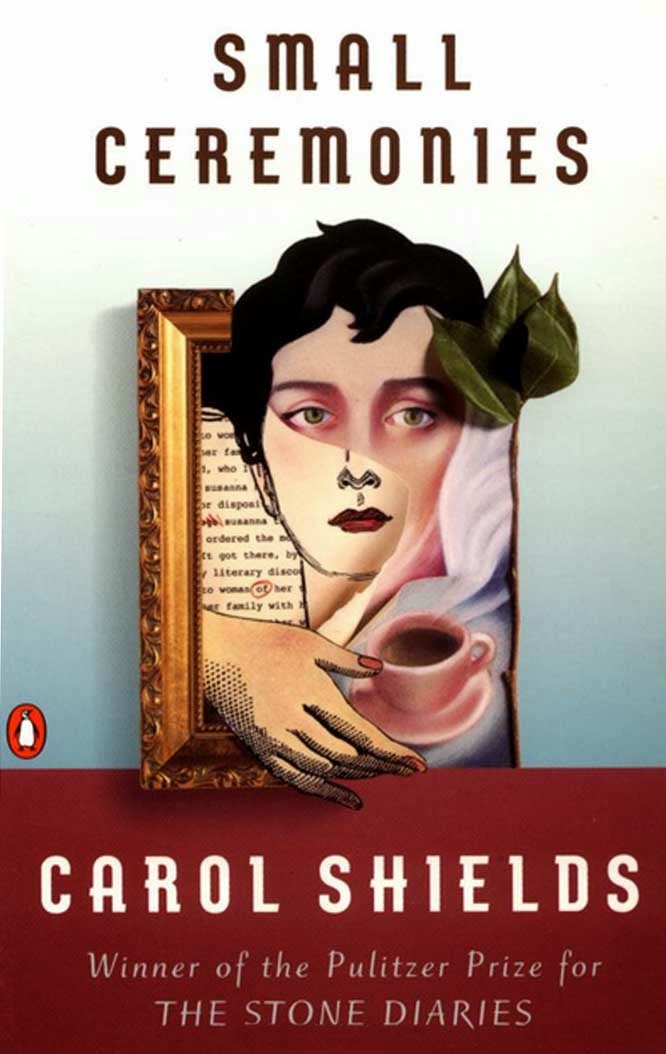 Small Ceremonies
Judith Gill is writing a biography of a minor Victorian novelist; she has also written a novel of her own but is unhappy with it – is it plagiarism and has she, in turn, been plagiarised? She’s also puzzled by her husband who keeps odd balls of wool in a bottom drawer, and her son, who shares his secrets only with a pen friend. This is a companion novel to The Box Garden. 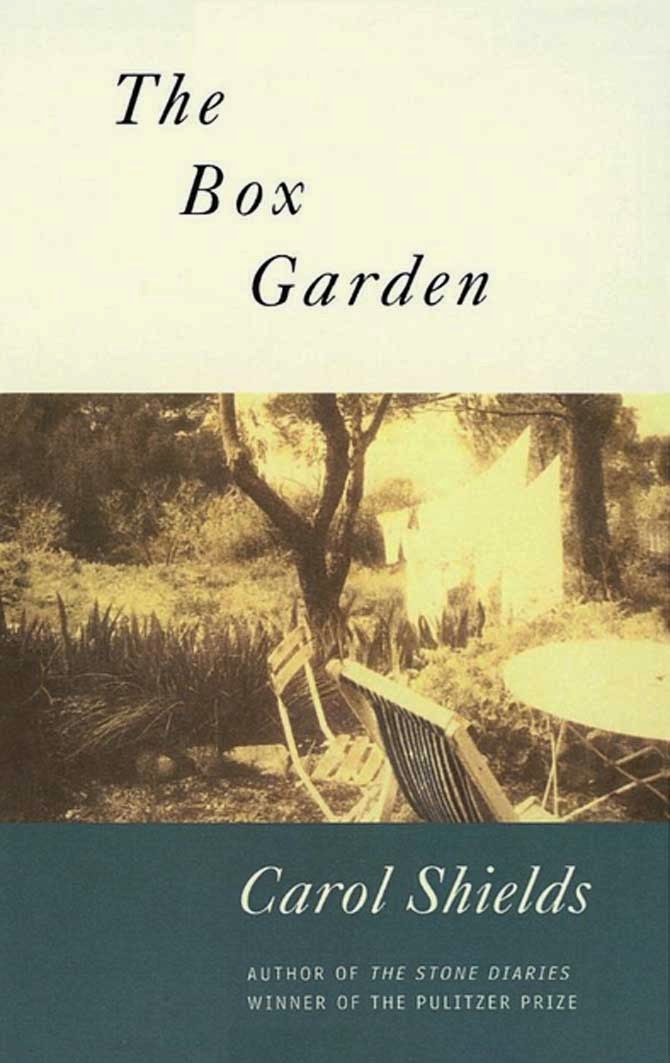 The Box Garden
Judith, from Small Ceremonies, has a sister, Charleen, and this is her story. Charleen’s husband has left her and their laid-back teenage son Seth, but they’re doing fine. She is a published poet, she has a job on the National Botanical Journal, and she has a man friend, Eugene. But her life – and Judith’s – is suddenly thrown by the news that their geographically and emotionally distant elderly mother is to remarry. Charleen goes to the wedding leaving Seth behind with her friend, Greta, who decides to interfere in the family dynamic in a very dramatic way. 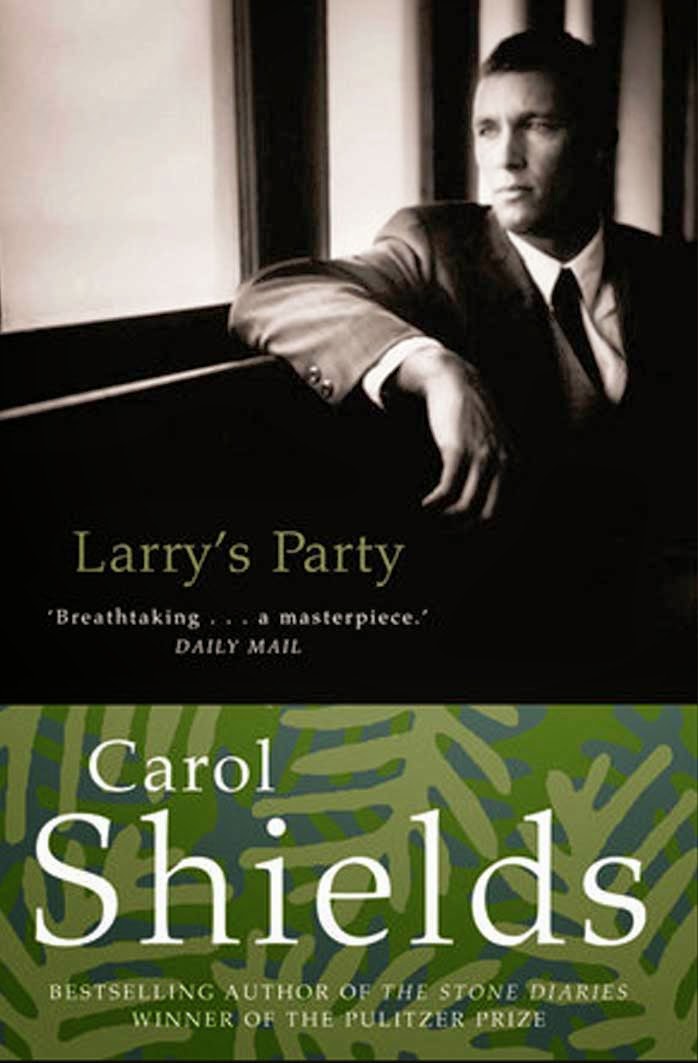 Larry’s Party
Winner of the Orange Prize in 1998. Larry gets fascinated by mazes after visiting Hampton Court on his (first) honeymoon, and eventually acquires a career and reputation for building them in Canada. I love the clever way this is written. It’s Larry’s life from 1977 to 1997, told in chapters called eg Larry’s Folks, Larry’s Words, Larry’s Friends, Larry’s Kid, Larry’s … er, a dangly piece of Larry’s anatomy. It ends with Larry’s Party and as the reviewer from Good Housekeeping said ‘The brilliant finale will go down as one of the great literary dinner parties, up there with Thackeray, Woolf and Austen.’

She also described it as ‘An intricately textured, utterly captivating new novel’ and these words could be used to describe all Carol Shield’s books. She won the Pulitzer Prize for The Stone Diaries, which proves, for me, that Pulitzer winners are much more readable and lovable books than are the Bookers (see the Pulitzer/Booker winners I’ve read here). 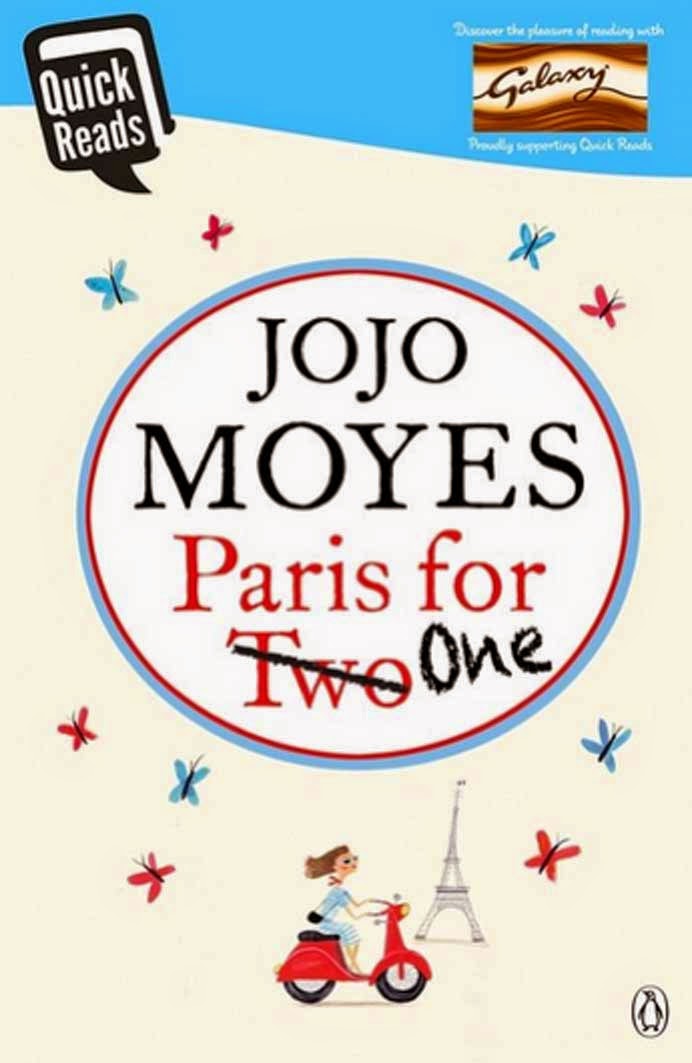 Paris for One by Jojo Moyes
A ‘Quick Read’ – but, as usual, from this author a warm and sparky one. When her boyfriend doesn't turn up for their romantic mini-break normally unadventurous Nell decides to go on her own. 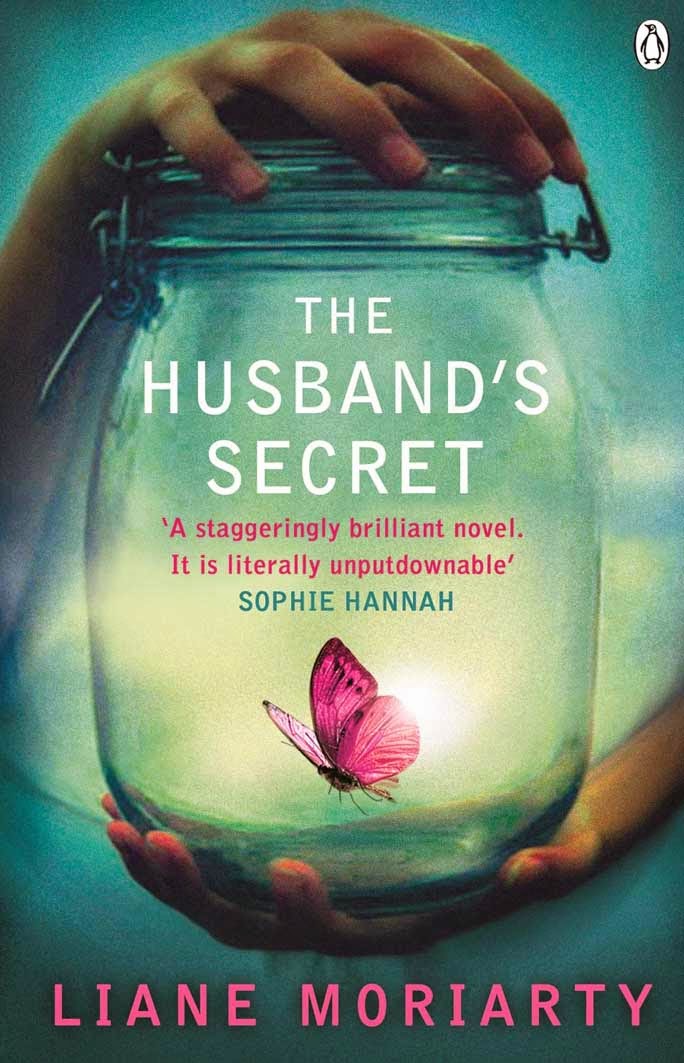 The Husband’s Secret by Liane Moriarty
Resisted this for long enough because there was a lot of hype round it but it waved to me from a scout jumble sale. I should probably have realised before I did what the secret was but when, with horror, it began to dawn on me I couldn’t put the book down. All the characters (it’s set in Australia) and their story-lines were interesting as was how they all tied together. I wasn’t sure about the epilogue though, didn’t think it was necessary, but will definitely read more of hers.

A talented family –  Liane is the sister of Jaclyn Moriarty whose YA epistolary novel Feeling Sorry for Celia I read and loved a few years ago.

I must admit I thought the name Moriarty had been made up by Arthur Conan Doyle – but then perhaps you thought Rowan Atkinson made up mine.
Posted by Kate Blackadder at 10:24 No comments: