I have two stories in People’s Friend publications this week – and I'm really delighted with the artwork they have given to each of them. 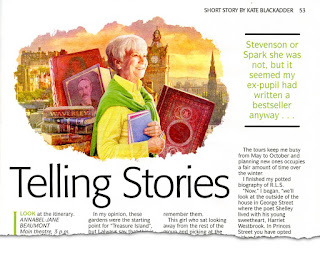 Telling Stories is in the weekly magazine (dated 25 June). A story about telling stories … my protagonist is Dorothy Mackintosh (‘Auntie Dot’ to her niece), a retired head mistress who gives literary tours of Edinburgh to small groups of tourists. For this particular group she has arranged a visit to a book festival – with unexpected consequences. I think she’s a character I might revisit.

Summertime Blues is in the Summer Special (No 125). This one is rather dear to my heart. I wrote a version of it years ago, long before I was Writing. It was around a thousand words then; now it’s three thousand. It was told from the first person point-of-view; then I did a third-person version; now it’s back in first. The setting and the era have always been the same though – an island off the west coast of Scotland in the summer of 1971.

It’s about feeling uncertain when you’re eighteen and are quite sure that you’ve failed your exams and that the boy you fancy doesn’t fancy you. I hope that all readers will empathise with these perennial problems and, for those of a certain age, that the story will conjure up happy memories of cheesecloth smock tops, purple flared jeans, Aqua Manda perfume, Maggie May and Chirpy Chirpy Cheep Cheep. Oh, and for readers of all vintages there’s also a ruined castle under the moonlight ...

Is any of it autobiographical? You might think so – I couldn’t possibly comment.
Posted by Kate Blackadder at 06:48 6 comments:

I read five books in May. 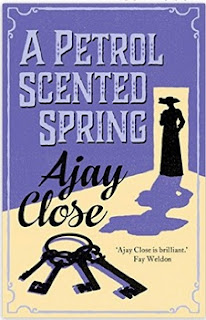 A Petrol Scented Spring by Ajay Close
Read on Kindle for book group. Set around the movement for women’s suffrage in Scotland and the hard core of militant Scottish suffragettes prepared to fight for the vote with any weapon to hand, it’s mainly the story of Donella and her troubled marriage to a doctor who has been force-feeding suffragettes in prison. The descriptions of force-feeding are not for the squeamish … but this is brilliantly written with some great characters. 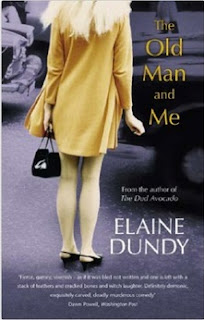 The Old Man and Me by Elaine Dundy
If you have never read Elaine Dundy’s first and most famous book The Dud Avocado, then I would urge you to – it’s a treat. The heroine of The Old Man and Me is as quirkily individual as Sally Jay Gorce (‘hellbent on living’) in TDA, but while Sally Jay was an American girl in Paris in the 1950s, Betsy Lou Saegessor is in London in the swinging 60s.

Her pursuit of the ‘old man’, the reclusive rich Englishman C D McKee (‘fat and ugly – but boy is he sexy’), has a very ulterior motive, stemming from her troubled childhood. Their relationship is sparky – great dialogue – and believable and Betsy Lou tells her first-person story in a most original style. ‘There isn’t a dull line in it,’ P G Wodehouse, no less, said in a review.

But how can C D McKee be an 'old man' when he's younger than I am ... ?? That's one perspective that means that for me the book hasn’t stood the test of time as well as the The Dud Avocado. Or  perhaps it's because C D has more health problems than you’d expect a man in his mid-fifties to have now (the book was first published in 1963; my copy is in the Virago Modern Classics series); or maybe it’s the swinging 60s thing that make it seem a period piece. But I’d still recommend it for the brilliance of Elaine Dundy’s writing and because as Jilly Cooper says of this edition it is ‘a gloriously funny novel … ’ 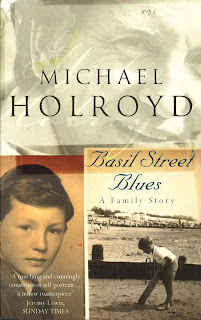 Basil Street Blues by Michael Holroyd
I read an extract from this online somewhere and thought his writing was wonderful. He’s best known for his biographies of literary greats (none of which I’ve read) but this is an autobiography.

Tolstoy’s famous quote ‘All happy families are alike; each unhappy family is unhappy in its own way' was never more apt than in Michael Holroyd’s case. When his parents died in the 1980s he felt the need to find out more about them and their immediate ancestors. His father and his mother had each been married and divorced three times and young Michael spent a lot of time with his father’s family, the only child in an eccentric and often very unhappy household.

He’s very amusing about his own perceived shortcomings and accident prone-ness. Once, when he was an articled clerk for a solicitor, he was spending a boring afternoon in court and somehow managed to unleash (fortunately tepid) water from a radiator over some witnesses. 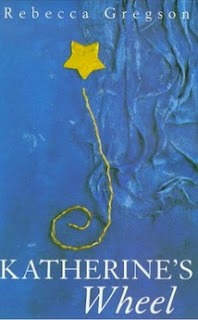 Katherine’s Wheel by Rebecca Gregson
First of this year’s haul from Christian Aid. Published in 1999, it’s about four friends, now aged thirty-five, who met at university and are planning a big party for the millennium. Didn’t really take to it, unfortunately. There were so many viewpoints, not just those of the four friends, that it wasn’t ‘Katherine’s’ story any more than anyone else’s. It was all like looking through a glass darkly – if there was something interesting happening in there I couldn’t make it out. 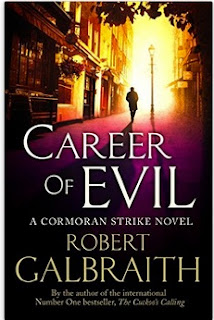 Career of Evil by Robert Galbraith
This Robert guy – he can write. I loved the first book in this series, Cuckoo’s Calling, and the second, Silkworm, but this one is even better; what a joy to know that s/he’s planning another four. Slightly disturbed though to read that there’s going to be a TV series – who will be cast as Cormoran and Robin??

Posted by Kate Blackadder at 14:24 No comments: