I read six books in August. 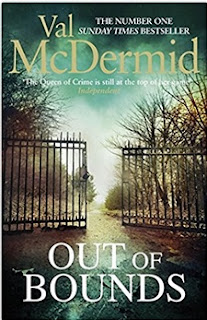 Out of Bounds by Val McDermid
My sister passed this on to me. 'There were a lot of things that ran in families, but murder wasn't one of them . . . When a teenage joyrider crashes a stolen car and ends up in a coma, a routine DNA test could be the key to unlocking the mystery of a twenty-year-old murder inquiry’. I’m not sure how I’ve managed to miss the first three books featuring Detective Chief Inspector Karen Pirie investigating cold cases (a la one of my favourite TV programmes New Tricks) but I will catch up asap. Fab. 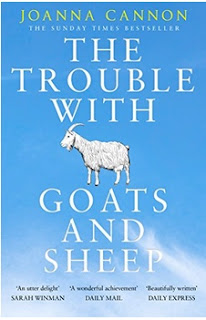 The Trouble with Goats and Sheep by Joanna Cannon
I got a lovely hardback copy of this in the Christian Aid book sale last year. The era appealed to me – the hot summer and drought of 1976 which I remember very well. I chose that year to move from Scotland … to St Albans (and thence to London the following year). My abiding memory of my first summer south of the border is of parched yellow grass in the park where I went in vain to get some fresh air after work. I did write a poem about that; wish I’d thought of writing a novel. Maggie O’Farrell also used this time for her Instructions for a Heatwave.

This is a cleverly constructed story of neighbours and the secrets behind closed doors. A woman from their street goes missing and 10-year-old Gracie and her loyal sidekick, Tilly, investigate (and search for God at the same time). I loved both girls: Gracie, a worthy successor to Scout in To Kill a Mockingbird (and the book does have its own Boo Radley pariah figure), and physically frail little Tilly – ‘She’d taken the bobbles out of her hair, but it stayed in exactly the same position as if they were still there.’ – can’t you just see her? 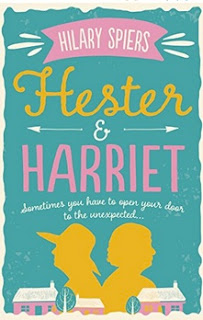 Hester and Harriet by Hilary Spiers
Bought in a charity shop – and what a discovery! I loved this story of two widowed, childless sisters (elderly but prefer to think of themselves as being in late middle-age …) who have been living together for the last six years. They reminded me a bit of Harriet and Belinda from Barbara Pym’s Some Tame Gazelle (one of my top ten books of all time, so I don’t say it lightly). But this Harriet and her sister face 21st-century dilemmas when they give sanctuary to a mysterious young woman from Belarus and her baby, and a cousin’s moody teenage son also lands himself upon their hospitality. 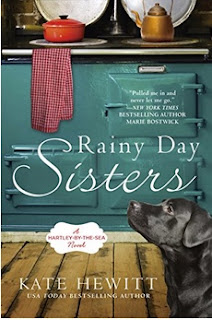 Rainy Day Sisters by Kate Hewitt.
Another sister novel – or half-sisters actually. I was delighted to win this in a giveaway by the author – I have read several of her books, particularly enjoying the Falling for the Freemans series (and The Vicar’s Wife under the name of Katharine Swartz). This is in her series Hartley-by-the-Sea – a village in a relatively untouristy part of the Lake District. Lucy has been living in Boston but when her life goes awry (thanks in no small measure to her own mother) she accepts an invitation from the older half-sister she barely knows, Juliet, who runs a B&B in Hartley-by-the-Sea. Juliet has her own problems (again, mostly to do with their mutual mother) and it takes various events, some involving other villagers, and revelations for the sisters to begin to understand and to love each other. 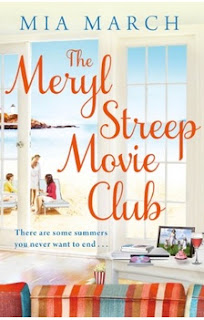 The Meryl Streep Movie Club by Mia March
Lent by a friend. The setting is the Three Captains’ Inn, Maine, New England. Lolly Weller, the inn’s owner, summons home her daughter Kat along with the two nieces she brought up, Isabel and June, telling them she has an announcement to make. As the weeks go by the problems each of the four women have are revealed and discussed in the context of whatever Meryl Street film they’ve just watched. I thought the ending was a bit rushed and I didn’t find all the relationships convincing (eg Kat’s with her childhood sweetheart – he seemed kind of creepy to me) but as a Meryl fan I found this an enjoyable read. 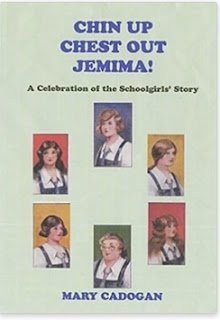 Chin Up Chest Out Jemina! A Celebrationof the Schoolgirls’ Story by Mary Cadogan
A Christian Aid Booksale purchase. I have blogged about my collection of girls’ annuals and I’m also a fan of the Chalet School and Abbey Girls series of books, and of Angela Brazil, so I was thrilled – Jubilate! – to find this celebration of schoolgirl stories brought out by Girls Gone By Publishers. It has extracts, stories, illustrations, and articles (one by actor Terence Stamp, whose first adolescent crush, would you believe, was on ‘Dimsie’, the chestnut-curled and leggy heroine of a series of books by Dorita Fairlie Bruce).

Some adverts from girls’ magazines are reproduced. Cricket bats feature in these – and typewriters: ‘Yes, Mary is quite the envy of her friends now her father has bought her a Bar-Let Portable.’ Those were the days.
Posted by Kate Blackadder at 06:14 No comments: