I finished five books in December. I also got about a third of the way through Storm Country by Peter Davies, about tornado chasing in the Great Plains of America but, can’t really explain why, I didn't find his writing engaging so I’ve given it up for now. 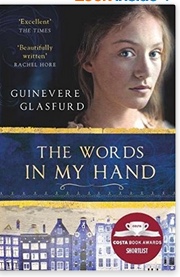 The Words in my Hand by Guinevere Glasfurd
Read for book group. This is the reimagined true story of Helena Jans, a Dutch maid in 17th century Amsterdam working for an English bookseller. One day a mysterious and reclusive lodger arrives - the Monsieur – who turns out to be the philosopher and scientist René Descartes. In a note at the end the author tells what are the known facts of Helena Jans’ life – for example she was literate at a time when most in her class were not and Descartes did acknowledge that he was the father of her child. Guinevere Glasfurd has filled in the gaps most satisfactorily, with a great sense of the time and place. If you liked Girl with a Pearl Earring you will like this. 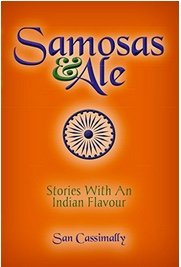 Samosas and Ale by San Cassimally
A feast of short stories with an Indian flavour, although they are not all set in the subcontinent. All have the name of a dish in brackets after the title. My Grandson the Detective (Korma) is a clever crime story. Nasreen (Phaal), like several of the stories written convincingly from a female viewpoint, was the sad story of an ‘honour killing’. Kokilaksha (Methi Pak), also with a female narrator, has an irresistible opening: ‘Although I have been on the lookout for a suitable man to father my child, I did not specifically book my Amsterdam-Delhi flight with that purpose.’ (I googled ‘Methi Pak’ and see that it is a dish that has health benefits but to some palates tastes bitter.) A beguiling collection. 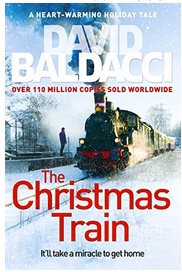 The Christmas Train by David Baldacci
Bought in Christian Aid Book Sale and saved for pre-Christmas reading. Although not worth the wait … I loved the idea of people on an Amtrak train in the US going through blizzards to get home in time for Christmas –  but Christmas (as opposed to winter) was barely mentioned until page 222 and there were too many virtually indistinguishable folk. There was a good twist at the end though and if I’d enjoyed the rest of the book more I’d have gone back and had a quick re-read in the light of that, but life’s too short. 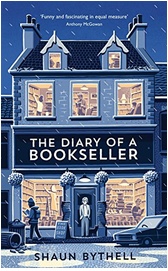 The Diary of a Bookseller by Shaun Bythell
Got on Christmas morning. Finished 27 December – there’s something about a diary as opposed to a chapter book; it’s almost impossible to stop reading. Shaun Bythell runs a second-hand bookshop (called The Bookshop) in the book town of Wigtown (in south-west Scotland – Scotland’s answer to Hay-on-Wye). He’s not Basil Fawlty but he doesn’t suffer fools gladly and plenty of them seem to frequent his shop, asking, for example ‘do you sell books?’ It’s not an easy way to make a living – in an area that is very summer-tourist dependent, and is also dependent on finding the gems among the dross in the books he’s offered and on the vagaries of selling online. A host of local characters get a look in, particularly his very eccentric Morrison-skip-diving assistant Nicky. I do hope there will be a further volume. 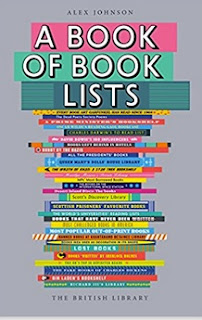 A Book of Book Lists complied by Alex Johnson
An irresistible, dippable-into Christmas present. I am in good company in keeping a note of books I’ve read – the book includes records kept by, among others, David Bowie and Art Garfunkel.

The other lists include:

and
Books that have never been written

Again I am in good company. I have a list of titles for about 50 books that I am unlikely ever to write – I may post them here sometime (or sell them to the highest bidder??). Samuel Taylor Coleridge apparently loved making lists of books/poems to write and then not doing so, while a list of proposed but never realised titles by Raymond Chandler include The Man with the Shredded Ear, Uncle Watson Wants to Think and The Diary of a Loud Check Suit. 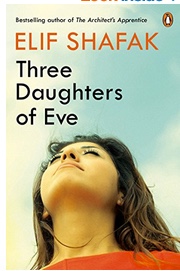 Three Daughters of Eve by Elif Shafak
Read on Kindle for book group. I hadn’t read Elif Shafak before but was looking forward to this as I was interested in knowing more about her native country, Turkey.

‘Peri, a wealthy Turkish housewife, is on her way to a dinner party at a seaside mansion in Istanbul when a beggar snatches her handbag. As she wrestles to get it back, a photograph falls to the ground – an old polaroid of three young women and their university professor. A relic from a past – and a love – Peri had tried desperately to forget.’

The premise was good and the story started with a bang but it kind of lost me after that. Rather than learning more about Turkey we spend much of the time in Oxford listening to undergraduates putting the world to rights – as they have been wont to do in many novels (and in real life) over the decades. The ‘three daughters of Eve’ are three Muslim girls – Mona the devout, Shirin the rebel, and Peri the unsure – Peri is troubled in various ways because of tensions within her family and because of her obsession with a charismatic Oxford lecturer.

I could really have done without all the Oxford angst and with much more of Peri’s home, the violent, noisy and hugely colourful city of Istanbul. 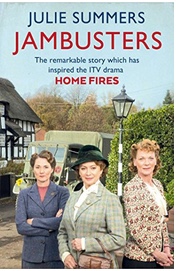 Jam Busters by Julie Summers
Although the cover shows an image from the television series Home Fires (lamentably axed despite much protest after two popular series) this is a non-fiction account of the considerable part the WI played during the Second World War from housing evacuees to collecting animal bones. Julie Summers’ research was instrumental in the tv series hence the connection. The ingenuity and dogged cheerfulness of the women who kept the home fires burning is humbling. 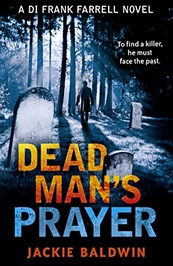 Dead Man’s Prayer by Jackie Baldwin
The first in a new detective series, set in Dumfries and Galloway. A detective with a difference – Frank Farrell was once a priest. He’d turned his back on the church but a violent murder which seems to have direct connections with the local parish priest takes him into a past he really doesn’t want to think about, and he finds out some very disturbing personal information. A page-turner – look forward to number two due out next year. 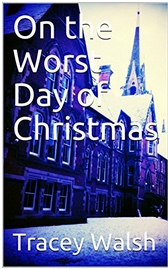 On the Worst Day of Christmas by Tracey Walsh
A snowed-in school reunion – which some of the class of ’96 will never be leaving. Can’t you just hear the background music … da da DAAA!!! A good twist on a classic plot, very entertaining. 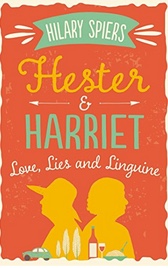 Love, Lies and Linguine by Hilary Spiers
This is the sequel to Hester and Harriet which I read in August and loved, about two widowed sisters, their young relative Ben, and Daria, a mysterious young woman they take under their wing. In this second novel Hester and Harriet take themselves off to Italy where their holiday takes some unexpected turns while back home Ben gets into a whole lot of trouble. A joy.

Crisis by Frank Gardner
A boys’ own thriller from the respected TV journalist, involving drug cartels in South America and a large cast of characters – all the more to bump off in various gruesome ways. Rollicking stuff.
Posted by Kate Blackadder at 14:08 No comments:

'Perfect for the festive season'

Stella’s Christmas Wish, published in November 2016 by Black and White, has had some delightful reviews in the last week. 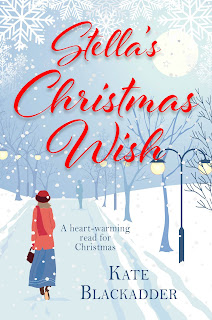 From Fictionophile (a booky blog I hadn’t come across before but will now be following):

‘ … This is a charming Christmas novel that will be appreciated by anyone who likes the work of Kate Hewitt or Rosamund Pilcher.  A ‘feel-good’ love story set over the Christmas season, and a heart-warming testament to the importance of family.’

(How brilliant to be compared to two (best-selling) authors whose books I love!)

From Withloveforbooks (again, a book blog I didn’t know; they did a lovely feature on the book, asking me to write a guest post (which I did, on sending Christmas cards) and doing a review which included:

‘ … Kate Blackadder's writing has a lovely flow. Her vivid descriptions of Melrose made the town come to life really well. It was easy to picture Stella's friends and family. I love stories about close communities and Stella grew up among wonderful people. I enjoyed reading about every single one of them. Stella's Christmas Wish is a charming and sparkling Christmas story with a terrific moving and fabulously romantic ending.’

From Lothian Life, an online magazine. Anne Hamilton raised some points about the book that I have been hoping someone would!

‘ … there are several other dimensions to this tale that raise it above being ‘just’ another decent bit of chick-lit.

I’ve said it many times, but the fiction world needs more strong and engaging older characters! And  it’s here that Kate Blackadder delivers that something extra. Stella and her ex, Ross, may be young, but other characters are not – Alice, Gray, Lilias – and rather than these being consigned to the realm of supporting cast, they are main players with their own stories, both developed and resolved.

Kate Blackadder has produced a light but not light-weight read, perfect for the festive season – or actually any other time of year.’

Why not have a read and see for yourself? Stella's Christmas Wish is available on various e-platforms including Amazon http://amzn.to/2dYQOrY

Posted by Kate Blackadder at 14:39 No comments: