I am very pleased to be featuring fellow Edinburgh Writers’ Club member V E H Masters (Vicki) on my blog today to ask her questions about her debut novel The Castilians* which was recently placed second in the Scottish Association of Writers’ self-published book competition.

*only 99p on Kindle until 16 April; also available in paperback

Scotland 1546 … and a preacher is burned at the stake. In revenge a group of lairds infiltrate St Andrews Castle and murder the instigator, Cardinal Beaton.

Local lad Will is among them, fighting for the Protestant cause. His traitorous activities place his family in grave danger, forcing his sister Bethia into an unwelcome alliance.

As the long siege unravels, Bethia and Will struggle over where their loyalties lie and the choices they each must make — whether to save their family, or stay true to their beliefs and follow their hearts. 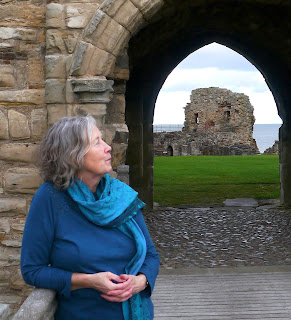 KB Welcome, Vicki, and congratulations on your success in the SAW competition. Did you decide at the outset to go down the self-publishing route?

VM Thanks Kate, I was very chuffed.

I know a few people who have self-published successfully so I shamelessly picked their brains. I also had a few ideas about how to promote my novel and, even if I’d been successful in finding an agent and then a publisher, I didn’t really want to give up the rights to my book. So I decided from the outset to go the indie route, and I’ve found learning how to market more enjoyable than I expected

KB Most people probably think of St Andrews in connection with its university or its golf course without knowing of its place in Scottish history – but even from a quick visit you can see the remnants of buildings that were there in the time you were writing about, six hundred years ago.

Apart from the Castle (looked after by Historic Environments Scotland) which landmarks would you encourage visitors to see (albeit virtually at the moment)?

VM Growing up in St Andrews was like living in the middle of a history lesson. Probably my favourite is St Rule’s and you get a fabulous view from the top. When I came to write The Castilians I realised how much the towers and spires of St Andrews were also about creating distinctive landmarks from the sea. For pilgrims coming there at the height of the pilgrimage era from the 13th to the 15th centuries their first sight of the town must have been something – like arriving in a second Jerusalem.

Margaret Skea, winner of the Beryl Bainbridge Award, has said of the book: ‘A clever blend of fact and fiction, with engaging characters, gripping tension and drama galore, and a dash of romance. For lovers of Scotland and Scottish history this is a great read.’

KB With which I can only agree … by coincidence I’ve read a couple of other novels recently which mix fact and fiction and I think yours is done the most successfully.

To be fair to the other two, perhaps it helps that you have written about a period of Scottish history that hasn’t often been fictionalised and as less is known about it there’s more space for a novelist’s imagination.

Certainly I finished The Castilians feeling that I’d read a really gripping story and also seamlessly learned some history along the way.

Did you have a lot of research that, for the sake of the story, you had to leave out?

VM Lots and lots and lots of research and most of it was, indeed, left out. I was convinced an academic from the university was going to pick the novel up in the local bookshop up and go through it with a red pen, so I was very anxious to be historically accurate. It boosted my confidence no end when Dr Bess Rhodes, an expert on the period, agreed to be part of my online launch.

KB And thinking of a different kind of research – I don’t want to give a spoiler but there is a very hairy scene at the end of the book, involving one of the characters whose only escape route involves a steep cliff and a churning sea below … how did you manage to conjure that up?

VM There was a point when I realised I needed to go St Andrews at low tide and study the cliff, and the access to the castle by sea. The uncovered rocks were slippery with seaweed and I ended up crawling over them determined to reach the seaward side – most undignified, but no doubt entertaining to those on the nearby beach. The castle is very dramatic to look up at from the rocks below, on its seaward side. It was all worth it, as I was then able to describe accurately what it was like to clamber off the rocks, although I still had to do some imagining because both the cliffs and the coastline will have changed over the past five centuries. 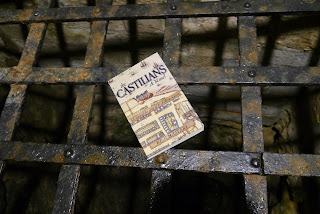 KB I was thinking that it was an interesting decision on your part to set a historical novel in the present tense – until I remembered that Hilary Mantel’s trilogy is done that way. It does give immediacy to events of so long ago. Was that something you always planned to do or did it evolve that way? And were there any difficulties in sustaining it?

VM Early drafts skipped back and forward, and sometimes half way through a chapter. In the end I liked the immediacy of the present tense and stuck with it. It does feel as though the action is happening now when write, rather than in the distant past.

KB If there were to be a film of The Castilians who would you like to see cast as Bethia? And as John Knox?

VM Peter Mullen would make a great John Knox (although he’d need to do an East Coast accent). Bethia would have to be an unknown actor  — it could be a great part for someone!

KB It certainly would. What are you writing now? Are we going to hear more about the Seton family?

VM I’ve just finished the first draft of the sequel, which will be out later this year if all goes to plan. I’m also planning on working in parallel on a WW2 novel I have half finished – I’ll soon find out if I’m being over-ambitious!

KB That sounds terrific – look forward to both of those. Thank you for answering my questions, Vicki, and all the very best with your writing.

VEH Masters was born and brought up on a farm a few miles outside St Andrews. The first time she ever visited St Andrews Castle was aged twelve, when her history teacher took the class on a school trip. She was fascinated when they crept down the siege tunnel and peered into the bottle dungeon, where Cardinal Beaton's body was said to have been kept pickled in salt for the fourteen months of the siege. When she heard the group had called themselves The Castilians, she thought, even then, what a perfect title for a book. 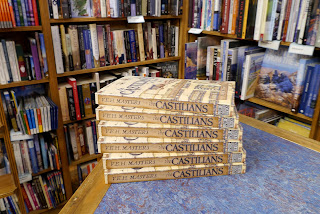 Posted by Kate Blackadder at 08:48